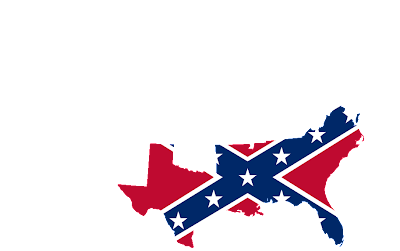 People tend to forget that the United States has never been all that united except in name.

There were tensions between the northern colonies and their southern counterparts during the Revolutionary War and in the subsequent founding of the nation.

The two sides were seriously at odds during the War of 1812 which some contend laid the foundation for the Civil War a half century later.

Since the Civil War the gap between the two factions has never truly closed.  Anyone interested in the state of affairs today will find Chuck Thompson's, "Better Off Without 'Em, a Northern Manifesto for Soutern Secession" a fascinating read.

Actually, having read Thompson's book,  it's easier to accept Michael Lind's contention that the latest fiasco in Congress was not the work of wild-eyed Republican fanatics but merely part of a calculated effort for the South to hold America hostage.

...one need not believe that white-hooded Dragons and Wizards are secretly coordinating the actions of Southern conservative politicians from a bunker underneath Stone Mountain in Georgia to believe that a number of contemporary policies — from race-to-the-bottom economic policies to voter disfranchisement and attempts to decentralize or privatize federal social insurance entitlements — serve the interests of those who promote them, who tend to be white Southern conservatives.

Just as a strategy is not a conspiracy, so it is not insanity. Ironically, American progressives, centrists and some Northern conservatives are only deluding themselves, when they insist that the kind of right-wing Southerners behind the government shutdown are “crazy.” Crazy, yes — crazy like a fox.

Another mistake is the failure to recognize that the Southern elite strategy, though bound up with white supremacy throughout history, is primarily about cheap and powerless labor, not about race. If the South and the U.S. as a whole through some magical transformation became racially homogeneous tomorrow, there is no reason to believe that the Southern and political class would suddenly embrace a new model of political economy based on high wages, high taxes and centralized government, rather than pursue its historical model of a low-wage, low-tax, decentralized system, even though all workers, employers and investors now shared a common skin color.

...The strategy of the conservative South, as a nation-within-a nation and in the global economy, combines an economic strategy and a political strategy.

The economic strategy is to maximize the attractiveness of the former Confederacy to external investors, by allowing Southern states to out-compete other states in the U.S., as well as other countries if possible, in a race to the bottom by means of low wages, stingy government (which if generous increases the bargaining power of poor workers by decreasing their desperation) and low levels of environmental regulation.

Lind goes on to argue that the South will win unless moderates from both parties and progressives go on to implement strong social policy reforms.  If they don't, Chuck Thompson's alternative seems eminently sensible.