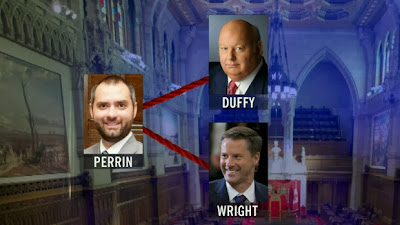 Former PMO chief counsel and Harper personal legal advisor, Benjamin Perrin, has been laying low since he abruptly left Ottawa and hightailed it back to the security of his teaching position at the University of British Columbia law faculty.

If you're looking for keys to unlock the Wright-Duffy-Harper affair, Perrin is a pretty good place to start.  When he beat feet he paused to claim he was not "in on it".  He had nothing to do with it, knew nothing about any cheque.  He was simply pining for the fjords of the West Coast.

According to Wright, that's wrong.   The former chief of staff says Perrin in fact was in the know.  He might have even been a player.

The saga, as I understand it, is that Wright's cheque was delivered from the PMO to the offices of Duffy's then lawyer at Ottawa's Nelligan firm.   She is said to have done what conscientious lawyers do with these things and deposited the cheque to her firm's trust account as I long suspected she would have done.  And, as I assumed way back when, the cheque came with a letter of undertakings. Lawyers do those sorts of things, they just can't help themselves.  That letter may have been signed by Wright but it wasn't drafted by him.  You see where this is going... 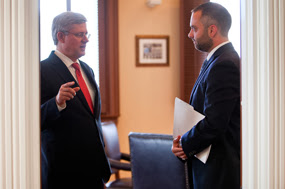 As chief counsel in the PMO, Perrin was Stephen Harper's personal legal advisor. That's what is called a 'solicitor and client relationship.'   Believe it or not, there are entire legal digests, volume upon volume full of endless numbers of case reports of court decisions dealing with the relationship between the solicitor and the client.   What exactly is the duty?  How far does it extend?  Where do you draw the lines?  What are the ethical parameters and rules?   Some points are esoteric.  Some of them are pretty plain.

Fortunately there's nothing particularly complex or esoteric in the immediate situation.   Nothing at all.   Unless you know that, at the very least, Stephen Harper already knows all about Wright's cheque to Duffy or you have been told by your client not to tell him anything about it, you have an absolute professional obligation to inform the client all about it even before the cheque goes out.

Especially now that he's been outed by Wright and may have been a party to the Duffy-Wright business, we need to have a chat with Benjamin Perrin.  A very serious chat.  And, for the purposes of clearing his own good name, Stephen Harper should waive solicitor-client privilege concerning this matter.  Of course to do that Steve would have to emerge from his bunker of secrecy and then he might get exposed to sunlight and his skin would catch fire and he would melt.

Perrin will never speak of any of this other than to repeat what he's already said, verbatim, using the same gestures, inflections and tone, exactly and precisely.

Which is about all we'll see from all the other players on the Conservative team from here on out I expect.

Sadly, I suspect that Harper would invoke solicitor-client privilege, Mound. No doubt he would justify it by citing some lofty legal principle against which he does not want to set a precedent, a rationale that only the borderline retarded and the Tory base might believe.

Lorne, you're being redundant.

"… a rationale that only the borderline retarded and the Tory base might believe."

The client doesn't have to invoke privilege, Lorne, it attaches automatically upon the creation of the relationship.

Dwelling on this has got me thinking of other things. My next post.