The Economics of Climate Change. 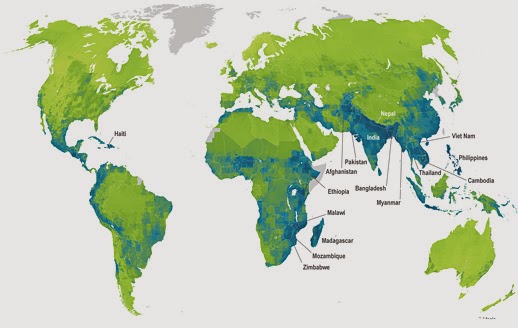 This is an eye opener.  From the CNBC business desk:

Around one-third of the world's economy by 2025 will be based in countries at "high" or "extreme" risk from the economic impact of climate change, according to risk consultancy Maplecroft.

Thirty-one percent or $44 trillion of output will be based in countries classified as most at risk from climate change in Maplecroft's Climate Change Vulnerability Index, which considered a nation's exposure to extreme weather events over the next 30 years alongside its capacity to cope with the impact.

"Future projected changes in the frequency and intensity of forest fires, severe weather events, droughts and flooding will affect the population, economy and infrastructure of a country. The effects of rising temperatures, shifting rainfall patterns and rising sea level will also be felt globally, impacting coast lines, plant and animal species, agriculture and human health," the consultancy said in a report on the index published on Wednesday.

Emerging economies were most at risk, the report found, with India, Vietnam, Indonesia and China among those set to feel the economic impact of climate change.

However, several developed world cities were also judged as vulnerable, including Osaka and Tokyo in Japan and Sydney in Australia.

Okay, did you get that?  2025?  That's just over a decade from now, the blink of an eye.   And it won't be like flipping a switch either.   The onset is already underway and it's coming on fairly rapidly.

Oh, but that's all going to happen in Asia, right?  Wrong.  A huge downside of our globalized economy is that what happens on the other side of the world rebounds in connected markets.  That's where you begin to see the until now barely noticed downside of dependency.

The most troubling aspect is that we're saddled with a government that cares little about such things.  We saw that in the global meltdown of 2008.  The Harper government was caught unprepared for that rolling juggernaut.  Harper absolved himself by declaring that nobody could see it coming, apparently not having heard the loud and clear warnings from Joseph Stiglitz, Nouriel Roubini or Paul Krugman.

When the meltdown did hit Canada, Harper had to take cover by proroguing Parliament as he hobbled together a disgraceful and woefully ineffective stimulus budget that did little more than add to the debt our children and grandchildren will have to repay.

And so we shall go on blindly, again utterly unprepared for this next economic battering of the global economy.  That's more than a shame.  That's  a crime.
Posted by The Mound of Sound at 11:32 AM