For This Guy, Smoking is the Answer to Alzheimer's 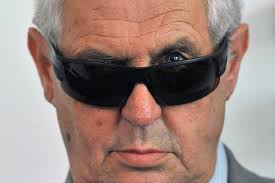 He's Miloš Zeman and he's president of the Czech Republic.  He's something of a character, fond of cigarettes and booze and known to pull something of  a Rob Ford every now and then.

Zeman recently announced that smoking can't hurt you if only you start when you're 27 or older and, better yet, it wards off the risk of developing Alzheimer's.

Speaking at a Philip Morris cigarette factory in Kutna Hora, Cental Bohemia, the president - who is well known for his love of the drink and cigarette, let alone falling down at public events - provided his audience, and the world, with the scientific breakthrough that smoking wards off Alzheimer's disease. His rational was that a person would die of cancer before getting Alzheimer.

According to Zeman, it is OK to smoke once you reach the age of 27. At that point, your body is fine and smoking cannot harm it.  "I would like to inform you," the president said, "that I started to smoke at the age of 27, when my body was fully developed and [I recommend] to your children a similar procedure. To wait up to 27 years and then smoke without risks."

I would recommend booze over cigarettes. Then at least you'll have reason for not remembering the night before.

Thanks for providing this invaluable public service, Mound.

Lorne, I graciously accept your thanks.

There might be logic to his madness. Keep them from starting when they are young and impressionable and hopefully they won't start when they are older and smarter.

Smoking* improves memory.
*actually, the nicotine
This has been proven in many scientific studies.
Little knowledge is a dangerous thing...
A..non