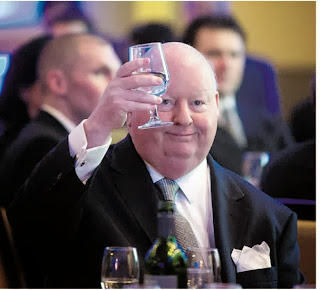 There might not be much of Shifty Steve Harper left by the time the Conservative convention rolls around on the weekend.


Duffy is back, as expected, with the revelation that there were two cheques from Nigel Wright and the deal was negotiated by infamous Conservative legal gunslinger Arthur Hamilton, the Conservative Party's own lawyer.

"Have you heard enough," asked Duffy, "or do you want to hear more?" as senators in the chamber listened.

"Do you want to hear more?"  There's an ominous overtone to those six words, depending on how you take them.

Well, the second check has been documented. I can't wait to see what else is going to crop up in these documents, this is going to be a very interesting day indeed on this score!

I really enjoyed listening to Mike Duffy, that was the best senate coverage...ever!

It was certainly one of my highlights from that body over the years, that's for sure! Worse for Harper is that Duffy added docs this time to help corroborate some of what he said, which does enhance his credibility, as Harper is still only presenting his good word as the sole evidence to back him and his government's side up. I also find it interesting that Duffy has taken the "Pay the money back!" statement he said last week that Harper jumped on to use to defend himself and undercut Duffy with back into being a credibility tool in his favour. It is looking like Harper made a significant tactical and possibly strategic mistake by saying that, because if that really was his position, they why would he allow his party to pay Duffy's legal fees in all of this dealing with his troubles? The check is significant not just because it was hidden from sight until now, but also in terms of what it shows was really going on behind the scenes regarding the 90,000 dollar check's true purpose as well as how wide the net was of those aware this was going on and in turn how much harder this makes to believe Harper saying he knew nothing of any of this. ESPECIALLY after he claims he told Duffy to pay the money back back in Feb, we are supposed to believe after that he never asked one question about it until he found out in the media in May about Wright's check to Duffy (and now it is also starting to look like that check may not have actually been Wright's, and if that gets proven, then the excrement storm really starts moving up the hurricane scale indeed)?!?!

Duffy has yet again blown apart the crafted Harper statements with these allegations, and this time with enough docs that add credibility making it harder to dismiss than last week's revelations. This story is not going away as easily as Harper oh so clearly would prefer it to do!

Dropping Arthur Hamilton into the cesspit was a carefully measured and timed step. There's plenty of significance in that, especially if you happen to be inside the PMO or part of the rotten Tory Senate leadership.

Another problem, Scotian, is that Harper's "good word" is something akin to shifting sands. First Wright was only trying to make good the loss to the taxpayers, then Wright did the honourable thing and resigned, then Wright was fired. First it was Wright acting alone, going rogue, and no one else knew. Then it was a few within the PMO that knew. Now it's the CPC chief counsel and gunslinger in on it from the outset. And Harper was none the wiser, right? Harper's word is fast losing all and any currency and he's rapidly becoming a genuine liability to the Conservative brand.

I wondered why the news reported today that Harper has changed the story to "nigel had been fired" It seems like he is trying to throw as much out there to discredit his staff.
and now with this Duffy performance...I guess it makes sense...to cut ties completely with Nigel, but Harper is making a bigger mess.
Duffy adding the Conservative lawyer...and the 13K chq...It definitely is a big bomb.
plus CBC has Rosie Odonnell reminding viewers that Greg Weston reported on the secret conservative slush fund(months back with the story first broke)...that is where they probably really got the 90K and the 13K.
I really love that Duffy has screwed the cons over...they messed with the wrong man.
Next up...hopefully Nigel Wright comes clean.(but he probably is still trying to be loyal to harper:P)

At another blog I likely would have put quotes around Harper's "good word", but given all I'd said here I suspected that the quotes would have been heard by you and the others. Given the amount of diversity in stories from Harper since this story first broke last May calling them shifting sands gives the a solidity I do not think deserved at this point.

Relax, Scotian. I wasn't trying to make anything of that.

Deb, what I'm told is that Nigel will not perjure himself if he's forced to give evidence under oath. He will not sacrifice himself to save Harper. And now, with Harper losing control of the narrative so badly, he's also bound to lose loyalty where he most needs it. If his own come to sense that he's gored, they won't throw themselves in harm's way to bolster someone who they see as mortally wounded.

With the Conservative convention opening on Friday, this could be the longest week in Stephen Harper's life.

Oh thats great Mound! hah, I am going to thoroughly enjoy the coming weeks, I have been waiting for the beast to be slayed for years:)

Sorry, I didn't mean for you think I did think that, no if anything I meant the opposite because I know the people here for the most part (and especially yourself) are well informed, pay attention, and can actually recall what was said more than a day or two prior about something, unlike it would appear at the moment our PM and so many of his defenders. I only added the bit about the sand because I think to equate his word to shifting sand right now is to give it a level of stability it IMHO lacks because it has been just that bad. I would hard pressed to consider anything beyond clouds substantive enough to equate to Harper's word on this affair by this point, it really has been that bad. I've been sticking around this blog during this unfolding issue because I am very pleased at the level of attention and understanding I see from you about all this, including on the process side and that is something that matters to me a great deal, as I am sure you know based on our prior interactions not just here but elsewhere in the past. Indeed, let me take this moment to thank you for the excellent work you have been doing on this front, it has helped me want to re-involve myself at least a little bit back into the political blogging world after I burnt out at the end of the last election.

I would not regard Mike Duffy as a hard-nosed journalist, but clearly his training and instinct for preserving the facts has stood him in good stead. Despite a rather hinky set of expense books, clearly there is a lot of fight in the guy yet. I never thought I'd cheer for him, but here I am.

The party of Confederation did in Lyin' Brian twenty years ago, perhaps Tory 2.0 is readying itself to do the same thing to Sneaky Steve before 2015 rolls around, especially if his approval slips down into the basement. At this point it must be falling like a rock, especially out east.

Thanks for your kind words, Scotian. I'm hoping that the constant digging and persistent hammering will help move public opinion to the tipping point where this horrible man will be brought down. At times I wonder what it takes for a person to continue to support this prime minister. I have withdrawn my support from Liberal leaders for so very much less.