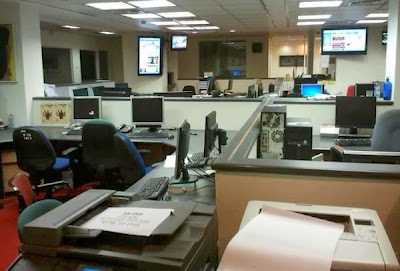 We have to recognize that Canada's democratic deficit will not be made right until we tear down the corporate media cartel.  Right now, government and journalism are in bed.  That's because of the unique and devastating qualities of corporate concentration of media control.

Here's an example of an e-mail I just got from The Tyee:

Canada is fundamentally changing. It's happening at a time when our national media are in collapse. Newsrooms are shrinking. Good reporters are leaving the business or having their best work locked behind paywalls. Every newspaper seems to run the same wire stories.

Why is this happening?

It appears the industry is more concerned with shareholder profits than your values. For example, three weeks ago the publisher of the Globe and Mail was quoted as saying, "We are really only interested in readers who earn more than $100,000."

Shocking statement. Could it be true?

The editor-in-chief later clarified: "the paper's target audience is people with a household income of $120,000, and retired or young people who either had, or are on their way to, a six-figure income."

Phewf! Glad he cleared that up.

Do you get the drift?  This is a media that has stopped delivering hard information, the oxygen of democracy.  It's in the business of flogging messaging to specific demographics.  It's a subtle form of infomercial journalism.  That's why corporate media outlets transition so effortlessly from government watchdog to government lapdog.  Because they're so concentrated, they have something to sell of immense value to governments and that can range from editorial slant to stories that get watered down or not run at all.   The worst part is that most people have no idea that it's happening.

There's been a reluctance to go after Stephen Harper on the Wright-Duffy-Harper scandal.  I haven't seen a major media outlet that has compared Harper's shifting behaviour on Duffy and Wright to his parallel dissembling in the Bruce Carson scandal.  The pattern is obvious so why not?  Why aren't we revisiting Cadman and Grewal or the G20 slush fund or any other Harper debacles?   What better way is there to bring context to what Harper is doing now?

Harper pleads innocent, they report it.  Harper accuses everyone else, duly noted on the front page.  Harper himself?  There they report what they have to in order not to give themselves away but very little more.

Who is really questioning why Harper is in such a rush to bury Mike Duffy now that he's finally talking and releasing documents?  Who is reminding us that Duffy's counsel, a top criminal lawyer, has clearly stated that there are documents that establish Harper was in on this under-the-table deal?  Who is asking how a prime minister directly implicated in this scandal can be so insistent on staunching the outpouring of evidence even as he changes his own story again and again?

Why are we still focusing on Duffy?  He's finished, done.  Once Harper's pet, he's now the prime minister's pet peeve.  Let's hear what he's got to say and read the documents he's dishing up, then analyze them and see where all that evidence leads.

But I digress.   This is about the corporate media cartel and democracy.  My point is that we need the parties vying to be our next government, NDP and Liberal, to commit to restoring a free press in Canada.  We need them to commit to taking apart the media cartel through forced divestiture of media outlets.  We need Tom Mulcair and Justin Trudeau to unequivocally acknowledge the democratic deficit that plagues Canada today and drives so many Canadians from their political process.  We need these two guys to acknowledge that our corporate media has been instrumental in the public's widespread apathy.  We need them to champion the principle that democracy cannot function without an informed electorate and that, to achieve that quality of public awareness, we need a broadly owned media that presents to the public genuine information coupled with the widest possible range of opinion.

And we need them to do this now.   Not later, not after one of them gets elected, for afterward it's far too easy for them to succumb to the corporate media cartel and its Sirens' Song.
Posted by The Mound of Sound at 10:56 AM

Unfortunately, the irony there is that any such commitment would lead to a media pile-on the likes of which we have never seen, and the one making it would have sealed their electoral fate. It'd be Saddam Hussein "Hitler" Mulcair, the man who can't get so much as a temp to his press conferences.

Before a party could contemplate doing that, they'd need to have taken steps to reforge themselves, using mass movement organizing and technology to get around media dependence. The NDP, sad to say, has been moving in exactly the opposite direction.

It's a daunting challenge, to be sure. It may well be impossible absent a progressive reformation. Sadly, corporatism is the order of the day in Canadian politics, the NDP not at all excepted. It's nice to dream that progressivism can be resurrected. Perhaps it is a thing of the past and gone for good. Yet, without clamouring for its restoration, our democracy is screwed.

I've noticed that NDP higher-ups are absolutely enthusiastic about movement building and solidarity with the grass roots . . . until you get to that part where the pesky grassroots movement membership start having opinions of their own.

Very similar to the Reformatory commitment to the grassroots that way, actually.

You know, PLG, maybe it's time for a new, genuinely progressive federal party. Since the NDP weighed anchor and slipped its moorings the whole political balance in the country has shifted to the right.

If we could somehow get us some PR I'd be unambiguously in support of that.