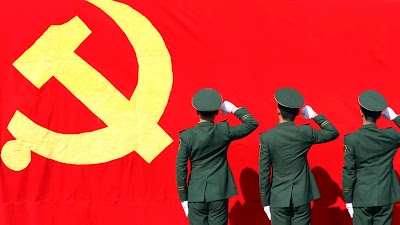 The United States has a huge advantage over every other nation, a goodie it has enjoyed since the end of WWII.  The American greenback is the world's reserve currency.   When business is conducted in your currency, including the accumulation of debt, and you have control of that reserve currency through your monetary policy - you're literally golden.

As I wrote a few days ago, the world is getting fed up with being held hostage to shenanigans from the United States that wind up threatening the economies and security of every other country.   I also mentioned that China might use the ongoing debt ceiling crisis to move against the U.S. dollar, to unseat it as the world's reserve currency in favour of one or more alternate, i.e. more stable currencies.   Seems like I was right.

As US politicians continue to argue about how to re-open its shuttered government and avoid a potentially damaging debt default, China's official news agency says the world should consider "de-Americanising."

After two weeks of brewing anger at Washington's debt brinksmanship, wehich could place Beijing's multitrillion-dollar US reserves at risk, the Xinhua agency seized on the impasse to say a "new world order" should be put in place in which all nations could be respected on an equal footing.

"It is perhaps a good time for the befuddled world to start considering building a de-Americanised world," the commentary said.  "Instead of honouring its duties as a responsible leading power, a self-serving Washington has abused its superpower status and introduced even more chaos into the world by shifting financial risks overseas, instigating regional tensions amid territorial disputes, and fighting unwarranted wars under the cover of outright lies."

The People's Daily, the Communist Party's mouthpiece, had a strident comment piece, saying "A country as powerful as the US, especially has no right to use a financial nuclear bomb to frighten the world."

As I mentioned previously, at the moment it's Congressional Republicans who are Beijing's best ally.  What's important to remember is that America's decline, since Ronald Reagan ushered in the death of a thousand economic cuts, is really not all that unlike the pattern that led other once great economic superpowers to yield their supremacy to a newcomer.   There is one dynamic that is most telling in this. It is the financialization of the superpower's economy, the outsourcing of its manufacturing or production base to its successor, and the use of its own wealth to grow its successor's economy.   For some reason they all do it eventually and it's always to grow the wealth of an oligarchy at the even greater expense of the nation and its people.

Canada needs to be very careful not to get swept up in any precipitous American decline.
Posted by The Mound of Sound at 9:02 AM

Mound, it is clear that America is on the downhill slide. If they continue with current shenanigans the U.S is headed for the has-been superpower.

Communist China can stuff the New World Order, where the sun doesn't shine. China is one of, the least trusted countries on the globe.Only Harper would be stupid enough, to hand Canada over to Communist China. Most Canadians detest Communism, Fascism and Dictatorships.

What we think of China really doesn't matter much, Anon. The U.S. has invested massively in bringing China the top of the heap even if they didn't understand what they were doing. That horse has left the barn.