Walrus Pay With Their Lives for Arctic Sea Ice Loss 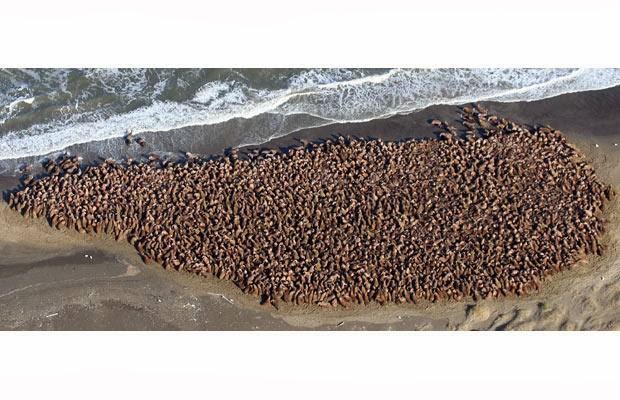 They would usually be scattered among ice floes in the Arctic.   Now, with the loss of that essential ice, up to 10,000 walrus have been forced ashore in Point Lay, Alaska.


The walrus have been coming to shore since mid-September. The large herd was spotted during NOAA's annual arctic marine mammal aerial survey, an effort conducted with the Bureau of Ocean Energy Management, the agency that conducts offshore lease sales.
An estimated 2,000 to 4,000 walrus were photographed at the site Sept. 12. The U.S. Fish and Wildlife Service, the agency that manages walrus, immediately took steps to prevent a stampede among the animals packed shoulder to shoulder on the rocky coastline. The agency works with villages to keep people and airplanes a safe distance from herds.
Young animals are especially vulnerable to stampedes triggered by a polar bear, a human hunter or a low-flying airplane. The carcasses of more than 130 mostly young walruses were counted after a stampede in September 2009 at Alaska's Icy Cape.
The gathering of walrus on shore is a phenomenon that has accompanied the loss of summer sea ice as the climate has warmed.
Pacific walrus spend winters in the Bering Sea. Females give birth on sea ice and use ice as a diving platform to reach snails, clams and worms on the shallow continental shelf.

Fuck the wildlife. We, the miners of bitumen, have dominion over all life.