How Will Duffy Speak from the Political Grave? 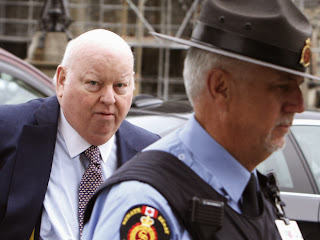 The rush to suspend senators Brazeau, Wallin and Duffy from the Senate has almost nothing to do with Wallin or Brazeau and everything to do with that troublesome priest, Mike Duffy.

Although he's far from a latter day Beckett, Duffy defies his own king's throne and power and must be squashed like a rather porky bug.  Harper wants him gone, disappeared, before the Conservative convention in Calgary this weekend.

Here's a thought.  Harper's stooges can suspend Duffy from the Senate.  They've already turfed him from the Tory caucus.  But doesn't that still leave him a member in good standing of the Conservative Party of Canada?  Doesn't that entitle him to attend the party convention this weekend?   He might have to pay his own expenses, granted, but I suppose there are at least a few who would gladly cover that too.

Ooh, ooh child.   Can you picture Duffy strolling across the floor of the convention, making the rounds of the hospitality suites, attracting at least a few supporters?  I can.   Can you imagine the cellphone videos of convention security strongarming the heart-weakened Duffy off the floor?  Oh my, my, wouldn't that be a sight fit for a king?

Yet, if Harper does raise the drawbridge and flood the moat of the Centre Block to keep Duffy out, what's the poor senator to do to keep tabling documents into the parliamentary record?   There's probably not another Tory senator willing to risk a severe mauling from the PMO.  No one wants a touch of Shifty Steve's lash.

Maybe it's time to take the scandal right where Shifty lives, onto the floor of the House of Commons.   Maybe there are a few stalwarts in the Opposition ranks who would be happy enough to continue the heavy lifting in Duffy's absence, who knows?   Maybe Mondays could become Scandal Day in the Commons.   And, if Shifty decides to absent himself on Mondays, then it can always be deferred to Tuesday or Wednesday - whatever, the guy can't be seen to be hiding forever, what would the neighbours say?

Duffy spoke of "a trail of e-mails" that have yet to be made public and that could turn into Shifty Steve's very own "trail of tears."  Question Period plus e-mails plus TV cameras - what's not to like?

Only delegates get access to the convention. Most of them are elected by riding members. Members of "the parliamentary caucus of the Party" can also go, but since Mr. Duffy isn't a caucus member, that doesn't include him or the other Senators under a cloud, unless they went and got themselves selected by a riding (which wouldn't be that hard).