How Will the Senate Vote If... 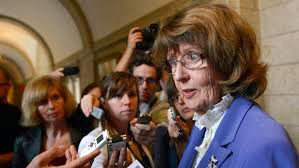 What if documents surface today that show Mike Duffy has been set up and this is all a carefully orchestrated scheme to get rid of that troublesome priest?

What if documents surfaced showing that the Tory Senate leadership cleared Duffy on the PEI residence issue at the outset and expressly approved his housing allowance claim at the same time?

How does that Tory Senate vote to suspend the guy?  How do they even leave him ousted from their Tory caucus?   Why they'd be screwed, blewed and tattooed.

And then everybody would have to look past ol' Marg LeBreton to that other lyin' bugger, Shifty Steve Harper, the guy who has worked so very hard to stuff the Duff under the Conservative Party bus.

Four out of five Canadians already believe their prime minister is dirtier than hell on this one.  A seismic jolt like this might be enough to drive that wooden stake straight through his dessicated old heart.  My, my, sad, sad - so sad.
Posted by The Mound of Sound at 9:50 AM

Mound, I hope that Con bus will run over Harpo now.

Well one seismic jolt came only a little while after you wrote this when Duffy said that he was written another check from the PMO. Maybe you could justify one check as an isolated incident. But two checks demonstrate an orchestrated effort.

Things are looking grim and could soon look even grimmer for the Emperor with no clothes.

L.D. that's not beyond the realm of possibility. Keep your fingers crossed.

KC, I guess the LeBreton docs may await another day. I really think she could not believe Duffy would go thermonuclear. His line, "do you want to hear more," was directed specifically to her and a couple of other senior Tory senators.