If You Still Don't Get It 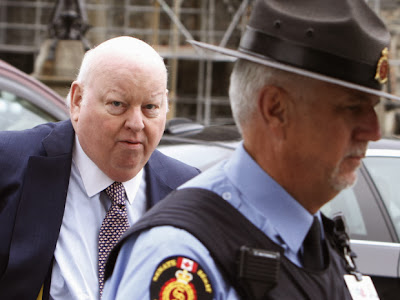 There are still some who don't get why the Duffy-Wright-Harper affair happened. Why would such powerful people expose themselves to such jeopardy?  Why was Duffy given such preferential, under-the-table treatment?

You can find the answer in an autographed photo of Duffy and Harper that graces the beleaguered senator's office.  It's all there in Harper's hand.

Harper writes, "To Mike, my most valuable Senator."

Most valuable.   Not my 'good' or 'close' or 'loyal' friend.  Not any of the salutations Harper inscribes on these things.  Most valuable, that's it.

Duffy campaigned like no one else.  He raised a pile of money, he swung a lot of votes.   During elections and in between he was in permanent campaign mode, flitting from one end of the country to the other.  I've heard it said that, in one 2-day period, he made appearances in 17-ridings.

That is the kind of person who is worth his weight in campaign contributions. That is the sort of person you want to preserve and, above all, control even if that takes inducements and threats.  Valuable enough that you make under-the-table payments, have Senate reports laundered, just about anything you think you can keep out of the public eye.

Valuable, sure, but if that person suddenly becomes radioactive, he can instantly be transformed into an unacceptable liability, someone who needs to be buried, quickly and quietly and never spoken of again.
Posted by The Mound of Sound at 10:20 AM

Agreed. He helped people forget Harper's long history as one of the most radical to revolutionary far right wing political personages alive in Canada involved in the political realm. He did a lot to make people more comfortable with allowing Harper to gain majority power, as well as his invaluable help in damaging the Dion Liberals (because until that footage came out in the final few days the race was a lot closer than it ended up, and the local anchor's look when it was released was something I've never seen before, the anger and disgust he felt for being abused and used to harm a political foe of Duffy's was palpable) while still running CTV's national political desk and his show Duffy Live. In many ways I think that was even more valuable than the money he raised, which also was no small aspect of his worth to Harper, but I really think it was for making Harper appear to be just another Canadian conservative not to be feared that was his greatest value though.

Mind you, Duffy is still making Harper appear to be just another Canadian conservative. You know, the Mulroney kind.

I've never forgotten the look on Steve Murphy's face when he was forced to report on the local news that his raw footage was being used to show Dion as a bumbling idiot when he knew that this was hardly unusual for anyone being interviewed even when they are talking in their own first language let alone their second one as was the case with Dion. You could tell he was infuriated to be used as a partisan tool that way, and that it wasn't anyone he could say or do anything to about it either clearly really stuck in his craw. In all the years I've watched Murphy I've never seen anything like that look before or since. You could tell he felt that his honour, both personal and professional, had been not just impugned but damaged by what Duffy did to it.

I think people tend to forget just how far outside anything remotely resembling Canadian mainstream conservative political thought Harper has always been, and until he finally got after the 2004 defeat that he could not win while still publicly showing his real views he was essentially unelectable. It took multiple clensings of his record and every tool he could find to make him over as a centrist Conservative to do so, and Duffy was clearly a LARGE (in all senses of the word) tool used to do just that. Wallin was another, but it was Duffy that Harper used the most extensively from his appointment to the Senate onwards until his win in 2011 for that purpose. I was always aware of what Harper's true beliefs were, I even was aware of the Calgary school back in the 90s, long before even most Harper foes these days were, which was why I was always so hardcore about stopping him at any and all costs for so long. In minority he was dangerous enough, but in majority given the flaws of our system in terms of checks and balances the dangers he represented as a majority PM could not be overstated.

It drives me nuts at times that I can see and work all this out using nothing but my brain and the internet (and in the old days news both televised and textual and reference sections of the Library) to see all this coming and people that are paid to recognize this either did not or worse did but thought the costs were worth the risks/damages. This despite it being clear to anyone who really looked that where Harper would be the most devastating was on the process side and the precedents he would set that would undermine so much of what we valued most about our political process side and took for granted. Ah well, that was why I felt burned out after the 2011 win and took a couple of years away from the political scene, if I watched every day my worst nightmare playing out the degree of bitterness I would have felt would have permanently poisoned me I believe. As it is I still have some, but at least it is not dominating my every thought (despite what some Dippers might believe). I care about the process more than I care about any partisanship, I always have, it was a great disappointment to my political mentor that I refused to follow her in the believe of my party/leader right or wrong approach to politics, and instead became a swing voter by nature.

Wow to Scotian. At least someone has been willing to put his/her reputation on the line and tell the truth. I hope you stay involved until this horrid man is gone. S. McCabe