Are We Going to Stand By as Our Kids' Future is Stolen? 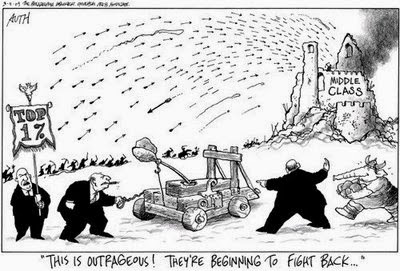 Jimmy Carter recently observed that today's American middle class is coming to resemble America's poor back in the pre-Reagan era.  That's the bad news.  The worse news is that Americans aren't alone.

Last week the International Red Cross warned that Europeans face decades of poverty, mass unemployment, widening inequality, social exclusion and collective despair from austerity measures inflicted on them by their own governments.

Like much of Europe, Britain's middle class is also being ravaged by chronic unemployment and mounting inequality.

The social mobility and child poverty commission, established by David Cameron, is expected to warn that government initiatives have all too often been aimed at the poorest 10%.   Yet the inability to get on in life is now a major and growing problenm for middle-class children and this group is in dire need of attention, it is expected to report.

A Whitehall source said:  "This will be controversial, but for the first time in over a century there is a real risk that the next generation of adults ends up worse off than today's generation.  This is a problem for the children of parents with above-average incomes, not just a problem for those at the bottom.   Many, many children face the prospect of having lower living standards than their parents.

With nihilistic corporatism firmly entrenched in the ranks of Canada's Conservatives, Liberals and New Democrats, our kids and theirs face the same future.  It's only a question of degree that will distinguish them from their American or European counterparts.  And it's not a matter of whether they'll be able to afford a McMansion either.  They're already being herded into the Precariat Corral. As their economic strength is sapped, their political power will also be siphoned off.  That's the way the slide works.  Our failure to look out for them today means our kids and theirs will face an awful fight tomorrow.

"Our failure to look out for them today means our kids and theirs will face an awful fight tomorrow."

How do we look out for our kids when even the most benign, peaceful protests asking for change are crushed by violent, corporate sponsored state repression?

What's the alternative, Anon? If today's youth and the generation to follow are to have a future, we have to find means to unseat the current political orthodoxy. That means recognizing that it infests all of our major political parties.

And it means holding those parties to account. Being a non-Conservative is no reason to vote for a person or a party.

Absolutely, Owen. I won't accept JT just to bring down SH. From past discussions I know you understand the difficulties facing today's young people trying to get started with their lives. What we are seeing, Owen, is the harbinger of even worse conditions in Europe and the U.S.

"...we have to find means to unseat the current political orthodoxy."

That is the key, finding the means. I remain hopeful that, when we trip over it, we will recognize the means.

I heard a discussion among some University students regarding, Harper, Obama and the NAU. Harper gave a speech in New York at the, Council of Foreign Relations. This was, Sept 25/2007. Harper fully endorsed the NAU.

Some of the students said, this strife on this planet is all about, the New World Order. Harper also gave a speech on, global governance for Canada. Harper was named the NWO frontman. Harper endorsed that too. That was on you tube, Dec 18/2010.

All I know is? Anything Harper touches, is dirtied, corrupted and fouled.

With sincere respect, Anon, your focus on Harper is an unhelpful distraction. Yes, he's the Prince of Darkness, Beelzebub incarnate. We know that but we're not going to change him or those who think like him.

I've been writing this for years, telling anyone who will listen. We need to clean up our own house. Most of us support the LPC or NDP. It's within our own parties that we have our only chance of changing course.

We need to purge the LPC and NDP of the very unhealthy levels of corporatism that has spread through them. We need them to be progressive again. We need them to speak to the things that resonate with the Canadian people so that we can bring those people who have turned their backs on politics back into the fold.

It takes courage to make this sort of shift and that's something our political leadership lacks.

What would a progressive restoration look like? It would begin by dismantling the corporate media cartel that keeps the public confused and docile. For example, we can see what is rampaging through the U.S. and Europe. Why isn't our media addressing what lies in store for our young in the decades ahead?

Having restored a truly free and vibrant media, we need to tackle inequality. Recognizing that most inequality, as Stiglitz chronicles in "The Price of Inequality", is the creature of our legislatures, not the product of merit or market forces, we need our legislatures to undo what they have done that threatens our kids' future.

We need to address inequality not only of wealth and income but also inequality of opportunity. Without that we're powerless to rehabilitate the middle class. Without that all we can do is hand them trinkets, which is the gist of Harper's new policy initiative.

Unfortunately Mulcair and Trudeau are not the sort of leaders to press such bold initiatives.

We have to act while there's still time to avoid the American and European disease.

When I read and see these views on contemporary Canadian society, I can't help but being reminded of Vermeer.

Thanks for the link, Anon. One of my greatest failures has been an inability to comprehend and appreciate both art and literature. When it comes to visual arts I'm tone deaf. I did watch the first two-thirds of the programme and it was genuinely interesting.

"When it comes to visual arts I'm tone deaf."

As a musician and computer scientist, I did not give visual art much thought. But the more you study the works of visual artists, the more you understand their insights.