Now They Want Our Media Gagged

What's the opposite of open and accountable democracy?  Governments that operate secret, domestic spy and police agencies.

Secret police and domestic spying are the hallmarks of totalitarianism.  And they're taking hold in both the United States and Canada.   The gold standard of these malignancies is, of course, America's NSA or National Security Agency.  Thanks to Edward Snowden we've had a glimpse into what goes on behind NSA closed doors and what we've seen isn't pretty.

This embarrassment has to stop.  No, that's not the innocent speaking but the guilty.  The head of the NSA, general Keith Alexander (shown below), wants the media muzzled, gagged, forbidden to report anything about him and his rancid outfit.  He's not just talking about American journalists either. 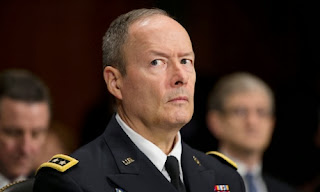 "I think it's wrong that newspaper reporters have all these documents, the 50,000 - whatever they have and are selling them and giving them out..   We ought to come up with a way of stopping it."

No, general, it's you and your agency that need stopping, reining in.   There's not enough breathing room in America for democracy and the NSA.   One or the other has to go.

Chancellor Angela Merkel is pretty upset. NSA spied on her and her telephone conversation. Obama has not been able to calm her down.

There is relatively diminished role of electronic spying in gathering useful information for protection against real military and terrorist threats. This was the original purpose for which electronic spying capabilities, laws and public understanding where developed.

After, I assume, well-justifying their usefulness and capability in their original roles, electronic surveillance organisations have expanded into corporate and political espionage. But the laws have not kept up. The politicians in charge, and the leaders of these organisations were obviously too weak and unclear about their mandates, and the risks to expanding them. (That's pretty obvious from the story about Keith Alexander and his bizarre comments.)

Mission creep meant more eyes seeing the intelligence, more staff, more contractors, more bureaucracy, more unclarity of purpose. That Snowden could get so much info is proof positive of that.

The fallout for international relations is likely to be very bad, and it is also going to completely compromise their original mandates of the NSA and CSEC (etc) to ensure the security of their nations.

It's just a big own-goal for international relations, security, and privacy.

You nailed it, Chris. I read an assessment last year that America's security apparatus is so interwoven with contractors that this affords America's adversaries an easy way to infiltrate the NSA security apparatus. It's such a huge establishment now that you have to wonder how many moles have already made it inside.

Oh, Lord yes. There are so many dimensions now on which other considerations go ahead of effectiveness in American military and "security" issues. In the old days we would have summed it up by saying they're decadent.

Under these circumstance, empires tend to fall.