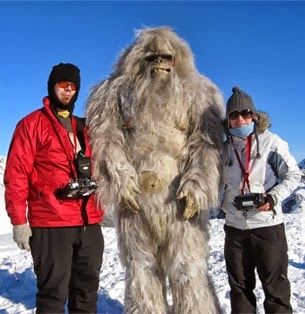 The abominable snowman?  It seems the Yeti may be the descendant of a prehistoric bear.

DNA testing of "Yeti" hair samples taken in the Himalayas reportedly came up with a match to DNA from the jawbone of an ancient polar bear recovered in Norway.   The jawbone is believed to be 40,000 to 120,000 years old.

The testing was done by, Bryan Sykes, a professor of human genetics at Oxford University.

The Yeti has reportedly fallen on hard times of late and now ekes out a living posing for photographs with tourists.

Mound, I understand there are a lot of Yetis in Ottawa and they are doing quite well. Have you done some research on that?

Well LD, there are some curious creatures there that seem to have recently mastered walking on their hind legs.

Mound, those are the ones I am talking about. Duffy is one of them. :))

Those are certainly abominable. But are they snowmen?

Yeh!! This comparison is unfair to snowman.