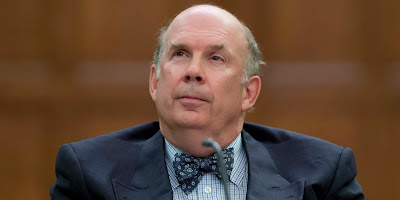 The Globe's Jeffrey Simpson neatly sums up why Marc Nadon falls far short of the standard needed for the Supreme Court of Canada.

Justice Nadon is undoubtedly a nice man and perhaps a competent judge, but he is not qualified enough to sit on the Supreme Court of Canada. Residency questions aside, his record in law and on the bench does not make him what the Supreme Court needs. His is at best an ordinary appointment, and at worst sub-par.

...Justice Nadon was a supernumerary judge at the age of 64. For those not familiar with the term, it means he was part-time. Supernumerary judging is one of the biggest boondoggles in the public sector. It allows judges, after a period of full-time service, to collect salaries while working only part-time.

Going supernumerary is what many judges do when they want partial retirement. If Justice Nadon was in semi-retirement at 64, how is he going to handle a Supreme Court judge’s workload?

...It is said that Justice Nadon has a special knowledge of maritime law. Which is good, except that maritime law cases might make it to the Supreme Court once in a quarter-century.

...The Commons committee charged with questioning Justice Nadon was given just two days to prepare and flubbed the job by not asking hard questions. The country’s law associations and professors knew so little about such an unknown judge that they fell silent. The Supreme Court deserves better.

Having a weak judge is problematic even at the motions or trial level.  Once the problem moves up to the appellate level the problems become exponentially greater.  At the very top, the Supreme Court of Canada. it's intolerable.  We don't need our own Clarence Thomas.
Posted by The Mound of Sound at 11:28 AM