The Battle That Nobody Wins 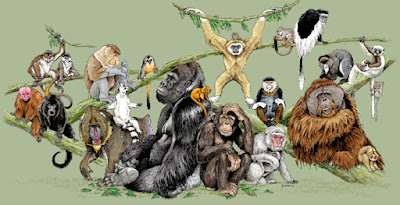 The primate population is embarking on a losing battle with climate change. From Scientific American:

According to a new study, climate change will adversely affect every single primate species on Earth. That’s every ape, monkey, gibbon, lemur and loris, no matter how super or strong they might be.

The study, published in the International Journal of Primatology, reveals that primate habitats will, on average, feel the pinch of a warming world 10 percent more severely than non-primate habitats. Not only will temperatures change, so will rainfall, with some species experiencing 7.5 percent more or less precipitation per degree C of global warming.

This is troubling news for the world’s primates, as many species rely on narrow habitats or have extremely specialized diets. Some primates only eat one or two things, so their food and habitats are particularly sensitive to disruption. Many primates are already endangered by habitat loss, hunting, or the illegal pet trade, so this additional threat could push several species over the brink.

The study comes out of the Damon Matthews Climate Lab, Concordia University, Montreal.
Posted by The Mound of Sound at 7:45 AM

Cant you see the heat?

The signs of what's happening are inescapable here on the island. We got a decent snowpack this year but it's the first in three years. That snowmelt during the summer months is absolutely vital to life our here. Without it the salmon don't spawn. Without the salmon the bears, the wolves and the eagles don't eat. They indirectly nurture the rest of the ecosystem. Everything's connected, everything is linked. Break a link and there'll always be knock-on effects.

Marine life is moving north away from warming waters to the south. It used to be on warm summer nights I'd leave my windows wide open and be greeted at sunrise by the barking of a solitary sea lion resident at the nearby French Creek fishing boat port. Now we've inherited a load of climate change refugees. They sound a lot louder but not one bit better.

We've got just one waterfront pub (probably has something to do with the advanced average age of the locals, kidney issues and bladder control problems). It's aptly named the Shady Rest. They get the odd whale show now put on by a pod of humpbacks new to our local waters. The prey fish have moved north and the food chain follows. Mammals, fish, sea birds not indigenous to this area are now moving in, taking up residence.

Some species make the transition, some don't. Alpine species keep having to move higher and higher to escape increasing heat they can't survive. Border fences prevent other creatures from relocating.

I think we should at least explore the idea of intervening to assist these at risk species to relocate to new habitats lest they be lost. I've always opposed invasive species but, with climate change, I'm rethinking old assumptions.