Sorry, Kinsella, But You Don't Get to Define "Fascism" 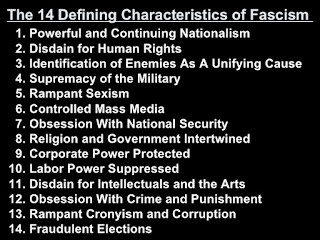 Especially not on the strength of a throw-away line from an American novelist, Sinclair Upton, about how "fascism = capitalism + murder."

The fascists, by the way, were Italian, Mussolini's crowd. Hitler's bunch were totalitarian but they were what we still like to call Nazis, sort of fascism taken to another level. And, yes, they both murdered some opponents, one far more than the other, but plenty of ideologies resort to murder and it's not the exclusive prerogative of fascists.

Here, for your edification, are three informed descriptions of fascism.  While there are various interpretations of fascism it remains an ideology best defined by its characteristics.

My critics will assure you that I'm not one to race to the defence of Tom Mulcair but, if you go through Dr. Britt's checklist you'll see the emerging signs of fascism in Mr. Trump. And remember, none of these charismatics come out of the box ringing all the bells. It's something that builds and grows but often fairly rapidly after they come to power. The trick is to spot it early and nip it in the bud.

That said, I agree that Mulcair needs to back off in demanding that Trudeau denounce Trump. We don't meddle in another country's electoral politics. Anyone who wants us to believe he's ready to lead this country should avoid this sort of stunt.

I would have much prefered to have left this as a comment on your blog but, like others who seem to cause you difficulty, I'm blocked. So, here it is, Sinclair Upton notwithstanding.

Excellent reference, thanks for the link!

Blind men describing the elephant. Facism is purely the ideological opposite of communism. The state run as a business, by biz.

Please, Hugh, I already mentioned that few charismatics start out ringing all the bells. Trump rings more than most. I find your persistent support for the guy rather curious.

The way I see it, the US already has most of the indicator points above.

I think a lot of Americans know what's going on and are really angry.

I'm just saying there are things about Trump which seem very positive. I could be misconstruing.

Trump alledgedly is a perfect facsist

The TPP and Bill C-51 in Canada are fascistic.

Why they haven't been completely dumped already is disturbing to me.

NAFTA ISDS challenges against Canada total about $7.3 billion. That's what I call fascism, see #9. Trump is opposed to NAFTA. Maybe we need a Trump.

What you need to do, Hugh, is take a broader look at that fucking megalomaniac. Explore his habits of self-contradiction, obfuscation, and outright lies. Why would you take anything that giant orange buffoon says at face value? C'mon, you can do better than that.

Anyong....Ha! Trump will punish women who have abortions. Now that's a mind breaker.


That's right, Anyong. He's also advanced policies that could only be implemented by thwarting America's Constitution. That too is common to fascists.

Reading that list brought Harper to mind as much, if not moreso, as Trump.

"Republican presidential front-runner Donald Trump predicted that the United States is on course for a “very massive recession,”