Hey, Canada is in the Spotlight Again. In Case You Couldn't Guess It's About the Tar Sands. 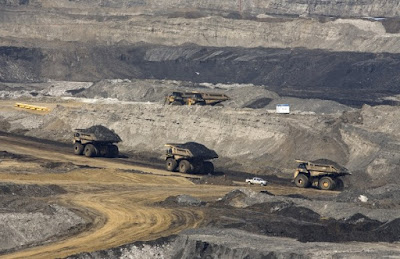 The Guardian does like to periodically remind us that, when it comes to climate change, nice, decent, oh so polite Canadians are utter swine. And they've got a point.

Justin, he's all for the Tar Sands. Why, that's how Canada is going to have a green future. Why didn't he just tell us he's figured out how to turn lead into gold? That would be more plausible.

The latest in The Guardian is a report on how Justin's Bitumen Buddy, Donald Trump, has nurtured investment in "extreme" fossil fuels, a.k.a. Athabasca bitumen.

Bank holdings in “extreme” fossil fuels skyrocketed globally to $115bn during Donald Trump’s first year as US president, with holdings in tar sands oil more than doubling, a new report has found.

A sharp flight from fossil fuels investments after the Paris agreement was reversed last year with a return to energy sources dubbed “extreme” because of their contribution to global emissions. This included an 11% hike in funding for carbon-heavy tar sands, as well as Arctic and ultra-deepwater oil and coal.

US and Canadian banks led a race back into the unconventional energy sector following Trump’s promise to withdraw from Paris, with JPMorgan Chase increasing its coal funding by a factor of 21, and quadrupling its tar sands assets.

Chase’s $5.6bn surge in tar sands holdings added to nearly $47bn of gains for the industry last year, according to the report by NGOs including BankTrack, the Sierra Club and Rainforest Action Network (RAN).

C'mon, you know that news is music to Justin and Rachel's black, black hearts. They've heard the warnings that increasing exploitation of this toxic sludge will be enough to guarantee runaway global warming but, hey, there's money to be made and somebody else does all the work.

When you cast your ballot next year and you reflect back on  how Justin's Liberals acquitted themselves in their term as a solid majority government, and you think of those troubling questions such as the Saudi Death Wagon deal or all the broken promises, especially electoral reform, and you're still undecided, throw a handful of bitumen sludge on the scale. It won't tell you how to vote but it will greatly help you figure out how not to vote.
Posted by The Mound of Sound at 9:23 AM

Tell me again what's so progressive about your ad hominem comments? It puts you in the same league as the RWNJs.

Lower your voice and strengthen your argument.

It is curious that reporters never seem to ask Justin or his Environment Minister about the details of their plan to control greenhouse gases. McKenna insists that Canada is right on track to achieving its targets but she never explains how. The wee little carbon tax certainly won't do it.

.. tar sands fallacy is stunning ..
We only get to hear the mainstream media echoing
and shouting about unfair 'discounted Alberta Oil'

I keep returning to the analogy
that chuck roast aint 'discounted' versus tenderloin
the problem is.. it aint tenderloin
and sending it to Asia or the Gulf Coast
aint going to make it magically into tenderloin

"RWNJ", Willy, that's the giveaway. There's only been one commenter on this blog who has used that - Jay Farquarson. It sounds like I touched a nerve. He gets rattled every now and then. Too bad.

And, as for the "ad hominem" business, I don't need anybody's approval to slag Trudeau. He got a good many BC Green supporters to vote strategically in the last election with his outright lies about electoral reform, climate change, pipelines and such. His record speaks for itself and it's quite offensive to a lot of us. I truly want to see the Libs reap what Trudeau sowed in 2015. He had a big lead in this province. He squandered it. Now Scheer's gang are the odds on favourite in BC and it's even worse in Ontario. Trudeau screwed us over and now it's coming home to roost. No more of that strategic voting crap.

Thank's for continuing to use "Tar Sands". It's not often called for what it is.

Oh, and thanks for proving my point with your own ad hominem comment.

I'll tell you what you're not, Anonymouse. You're not logically consistent. You criticize someone else for what you laughably call an ad hominem attack (I guess you're not familiar with the notion of public figures) and, in the next breath, suggest that I'm something of a RWNJ. That's "ad hominem," douche bag. Calling you a douche is not because you choose to have no discernable identity. That means anyone can slag you to their heart's content. Now, please, do fuck off.

If not trolls, well I think the Flat Earth Society has their application on file.