When They Say "Job Churn" They Really Mean "Serfdom" 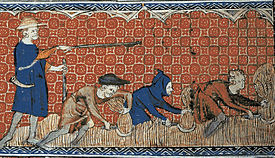 Whether it's electoral reform, bitumen pipelines, or even job security, the Trudeau government has an infuriating "well, that's just the way it is" attitude. Okay, we're sorry but that's the way it is.

Morneau wasn't joking when he dropped it on Canadians that they had to accept a future of "job churn" - hopping from one short-term job to the next and hoping not to miss too many paycheques along the potholed path.

Contract work. Short-term. No benefits, nothing. And then, on to the next - if you're lucky. Feel the churn.

There'll be two classes of Canadians: the job churners and those spared that economic indignity, people like Morneau and his prime minister.

Chris Hedges calls it what it is, "serfdom."

Corporate capitalism is establishing a neofeudal serfdom in numerous occupations, a condition in which there are no labor laws, no minimum wage, no benefits, no job security and no regulations. Desperate and impoverished workers, forced to endure 16-hour days, are viciously pitted against each other. Uber drivers make about $13.25 an hour. In cities like Detroit this falls to $8.77. Travis Kalanick, the former CEO of Uber and one of the founders, has a net worth of $4.8 billion. Logan Green, the CEO of Lyft, has a net worth of $300 million.

The corporate elites, which have seized control of ruling institutions including the government and destroyed labor unions, are re-establishing the inhumane labor conditions that characterized the 19th and early 20th centuries. When workers at General Motors carried out a 44-day sit-down strike in 1936, many were living in shacks that lacked heating and indoor plumbing; they could be laid off for weeks without compensation, had no medical or retirement benefits and often were fired without explanation. When they turned 40 their employment could be terminated. The average wage was about $900 a year at a time when the government determined that a family of four needed a minimum of $1,600 to live above the poverty line.

I began an essay the other day with the unusually long title, "First They Captured Legislators. Then They Captured Regulators. Before Long They Captured Presidents and Prime Ministers. Now They're Capturing Our Elections, Our Votes, Our Democracy."

I was inspired by an article in The New Yorker about shady billionaire, Robert Mercer, the guy who floated Cambridge Analytica. He exemplifies what I had been reading for years about corporatism, namely that corporatism doesn't seek to influence government. It wants to own government.

Mercer [is] emblematic of a major shift in American politics that has occurred since 2010, when the Supreme Court made a controversial ruling in Citizens United v. Federal Election Commission. That ruling, and several subsequent ones, removed virtually all limits on how much money corporations and nonprofit groups can spend on federal elections, and how much individuals can give to political-action committees. Since then, power has tilted away from the two main political parties and toward a tiny group of rich mega-donors.

Private money has long played a big role in American elections. When there were limits on how much a single donor could give, however, it was much harder for an individual to have a decisive impact. Now, Potter said, “a single billionaire can write an eight-figure check and put not just their thumb but their whole hand on the scale—and we often have no idea who they are.” He continued, “Suddenly, a random billionaire can change politics and public policy—to sweep everything else off the table—even if they don’t speak publicly, and even if there’s almost no public awareness of his or her views.”

It began by delaminating the bond between voters and those they elected to power. Corporatism insinuates itself into the gap, creating an often unbridgeable chasm between legislators and the voting public. It goes from legislative capture to regulatory capture where regulated industries are able to stack the regulatory boards with their handpicked representatives, a gross corruption that we have seen even in Canada. The little guy essentially gets dealt out.

This is where progressivism should come into play. Progressivism envisions government in service to the populace. It is government that restrains corporatism rather than falling in league with it. It is governance that constantly balances the competing interests of labour and capital in a manner that recognizes, of the two, labour to be the most important, just as Abraham Lincoln proclaimed. It recognizes that workers who have neither job security nor adequate incomes cannot provide the nation, their communities, even their families with the full benefit of their service. They cannot be the citizens the nation needs them to be.

It's a matter of priorities and principles not to be found in our political leadership today. Hedges, of course, advocates revolution. I'm finding it more difficult with each passing year to dispute that.

The origin of the word "service" is "slave".

"Job Churn" is already an ongoing reality here in the U.S..
Most services employ contract workers, and a lot of government agencies routinely employ temps.

It has been claimed, TB, that a couple of decades of "easy credit" and cheap goods on WalMart shelves gave blue collar America a false sense of security and wellbeing that enabled neoliberalism to effect a massive transfer of wealth out of the working and middle classes straight up to the richest of the rich. Eventually the blue and white collar workers were herded into the precariat, Morneau's world of "job churn," where, enfeebled by personal and household debt, they were powerless to object.

The willingness to take on debt seems to come from an unwillingness to do without creature comforts.
That said, good advertising techniques have done their job!
Kind of the precursor to Facebook and Cambridge Analytica.

Terry O'reilly sums it up..

We just have encourage the young slugs to take more pride in their side-hustles.

It's great for Sarah.


With what I read Uber drivers are making these days, I'm not sure Sarah's side hustle is that lucrative.


Thanks for the link, Trailblazer. It looks interesting. I'll check it out later.

Serfdom certainly is the right word for it. Indentured servitude to our rulers. Puppet politicians, and no hope of change to the status quo for generations. Unless we vote Libertarian, and then we might have a chance for freedom.


Anon, we don't have a Libertarian party and the dogma of Ayn Rand isn't going to do anything but worsen the problem. Take a look at American billionaire, Robert Mercer, who is a poster boy for libertarian ideology. He sees every individual's value as a measure of their net worth. The precariat - those who have to go from one low wage/no benefits job to the next, living paycheque to paycheque, and hoping to survive the gaps without falling through the cracks - they have absolutely no worth in Robert Mercer's eyes. The Libertarians are essentially Social Darwinists, the very group who would not hesitate to reinstate economic fuedalism. In other words, don't peddle your crap here.