You Wouldn't Knowingly Throw Plastics Into Our Lakes and Rivers, Would You? 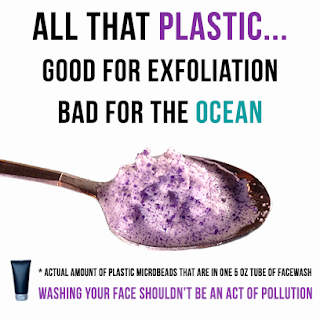 Well, if you're fond of those exfoliant cleansers, you might have been doing it unknowingly.   Researchers trying to assess the magnitude of waste plastic debris in the Great Lakes in 2012 were in for a surprise:

Some of the samples they collected from Lakes Huron, Superior, and Erie indicated the presence of as many as 450,000 bits per square kilometer—twice as many as had ever been recorded. And the scientists were mystified by the form that so many of these microplastics took: multicolored, perfectly spherical balls a fraction of a millimeter in diameter.

Further investigation solved the riddle. The tiny balls were plastic microbeads, of the kind found in many popular exfoliating facial scrubs. "It was like someone had taken an entire bottle of facial cleanser and poured it into our sample container," says Sherri Mason, an environmental chemist at the State University of New York-Fredonia, who conducted the study with scientists from the University of Wisconsin-Superior and the 5 Gyres Institute, a nonprofit research and advocacy group.

While microbeads may be less visible than plastic bags, they are no less environmentally problematic. For one thing, they "look just like fish eggs, and thus like food" to a variety of aquatic organisms, says Mason. All marine microplastics are troublesome, given their tendency to absorb and concentrate persistent organic pollutants that can potentially accumulate in the fatty tissues of anything that eats them. Moreover, when plankton, lugworms, mussels, or fish fill up on toxic junk food, they may well lose their appetite for healthier fare. Dutch scientists who fed mussels tiny nanoparticles of polystyrene found that the shellfish subsequently ate less and grew less.

Like the plastic in the oceans problem, which has no effect on people, nobody really cares to do anything, even if it might be a disaster for seabirds, turtles, and probably many fish and invertebrate species. And bioaccumulation of pollutants affecting people, even Inuit hunters, is an oversold problem. For Belugas, it might not be.

I wouldn't play up the "bad for people" angle. We should care about pollution for its own sake because that is the ethical thing to do. If we only care about pollution to the extent that it effects people, then we may well end up living on a rubbish dumb. Some people already live (healthily enough) on those.

Along with birth contol and all other medications gathering at more and more percentages...yuck!!

I have your point, Chris, but bioconcentration is having an impact on our Orca.

Anon, there is hope. I watched a programme recently where Montreal sanitation officials discussed a new, secondary waste water treatment that will supposedly cleanse treated water of medicines and other chemicals.

How long will that take to be invoked? 20 years?

I had no idea about the plastics in cleansers.

Google notes that there are alternatives - some on which I will switch to.

Not to worry; the "Invisible Hand" of the free market place will sort it all out...