When It Comes to Choppers, Once Again the Harper Government Can't Tell Its Arse From Its Elbow 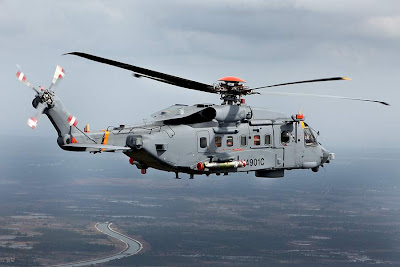 Since then we've had Jean Chretien, Paul Martin and most recently, the armed forces BFF, Steve Harper, and still no helos.   Perhaps its the signature feature of Peter MacKay's extended tenure as DefMin and, as such, to be expected, but the helo replacement contract with Sikorsky is floundering.

Now this is Sikorsky, the American military's biggest helicopter contractor and supplier of helicopters to militaries around the world.

It turns out a new study by Hitachi Consulting concludes the Department of Defence-Sikorsky deal is effectively kaput.  The RCAF wizards said they were buying an "off the shelf" helicopter that is anything but.  It turns out the air force boys wanted those CH-148 Cyclones loaded up with the latest and greatest, state of the art, everything.  The Hitachi report called it "unsurpassed in the world today."

Because this isn't an off the shelf helicopter but, instead, a major development project, Hitachi concludes that "Government and Sikorsky are therefore misaligned in the most fundamental way."

The programme from the MacKay days is lacking in, "a common operating framework, common goals, common terminology, and a common understanding of expectations."   The programme, it concludes, is no longer viable if it ever was.

What the report seems to suggest is that it's time the Harper government did its job and acted like grownups instead of relying on those untrustworthy little shits in blue uniforms.   Sounds like a plan.

The consultant's report appears to confirm a report in February by UBC prof Michael Byers and military analyst Stewart Webb that questioned whether Canada should simply abandon the contract and start all over again.

Ya gotta ask: What has little Steve fucked up this summer.

Makes me wonder how bad things would be if he hadn't gone on vacation.

This sure hasn't been his year, has it. You left out Wright-Duffy, Wallin, Tkachuk, Stewart-Olsen and the supporting cast.

Ray, we can find plenty of fault with John Baird but surely the nudge, nudge/wink, wink stuff isn't necessary, is it? I actually commended Baird for his open criticism of Putin's homophobia.

I agree. But it certainly points to a commonly seen element of Baird's character: There is no way the man will ever take up a human rights cause or stand up against any kind of injustice if his own ox isn't being gored.