It's an urgent, trillion-dollar threat that Harper thinks we should throw $50-billion dollars at over ten years.   Hint:  He should have made a $50-billion down payment on it in his stimulus budget in 2009. 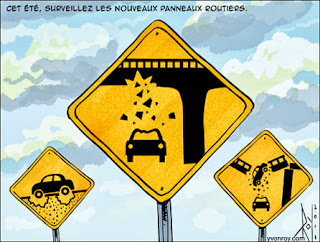 Stephen Harper is thinking of funding a $50-billion/10-year infrastructure programme.   That money won't even keep up with the pace of deterioration much less rebuild Canadian infrastructure to meet the challenges of climate change over the century ahead.  At least Nero fiddled while Rome burned.

In June, while Calgary was flooding, the World Council on Disaster Management held its annual convention in Toronto.   One expert in attendance, Dr. Saeed Mirza, emeritus professor at McGill, warned that Canada's aging infrastructure was in dire need of upgrading and replacement.   He estimated we were looking at expenditures in the neighourhood of a trillion dollars and far more than than if we continued to put it off.

In January,  2009, the Brookings Institute made the case for similar, massive infrastructure spending in the United States.

"Major infrastructure projects of the past - such as the interstate highway system in the 1950s - were associated with steep increases in productivity.  This productivity has receded in recent decades as investments have lost direction
and failed to focus on key areas.   Without a national strategy for infrastructure, we are not experiencing the economic benefits of transformational programs like the interstates, the social benefits of iconic programs like rural electrification, or the sustainability benefits of air and water pollution control programs of the 1970s and 1980s."

It was Mark Twain who coined the line about how, to a man who has only a hammer, everything looks like a nail.  Harper has that same lack of focus, a chronic inability to distinguish between spending and investing.  That much was plain in his 2009 stimulus budget that I termed at the time his "pinata budget."

Too timid or ideologically hidebound to take the responsibility for investing the stimulus funding on something that would be useful to the country, he gave it away to those who were ready to put a new deck on the cottage.  It was a colossal waste of money.  A subsequent study concluded the money, all of it borrowed,  was squandered so poorly that Canada lost out on 150,000 potential jobs.

The Harper government knows Canada is facing an infrastructure crisis but it's not about to tell the public any time soon, not while it still can kick that can down the road.  What it knows only surfaced through access-to-information demands from the media.

The country and the very government responsible to protect it are falling apart on Stephen Harper's watch.  He's digging us a very, very deep hole.
Posted by The Mound of Sound at 10:12 AM

Harper has no concept of invested debt, Mound. He sees all debt as a cost, not an investment.

It's too late for Canadians.

When a country sleep-walks into being bamboozled and lied to, it takes 10 years to recover from that (2011).

Whoever comes next has to pick up all the detritis.

How will Canada remember Steve? I don't know, but I think it will be with a tinge of regret.

p.s. not the same Anonymous as the last one

Harper bears his share of the blame for the state of Canada's infrastructure, to be sure, but it's a deeper malaise than just him. It reaches into every provincial legislature and city and town council where elected representatives have lacked the courage to act responsibly and we, the citizenry, have allowed them to get away with it.

I've been writing about the coming infrastructure problems for awhile. It's not just Harper, or the Liberals, or politicians in general. Much of it is us and denial.

This all comes back to peak oil and the increasingly expensive standard of living we have become accustomed to. Major highways, the bridges, all of it was largely built during the time of cheap energy. It was easy to build these things at a 200:1 energy ratio. It's not so easy to maintain them at a 3:1 energy ratio and urban sprawl and constant expansion doesn't help.

The infrastructure issues that all western nations are running into are symbolic of the limits to growth we've reached. This unto itself doesn't call for any blame to be laid, where blame is to be laid is in our continual denial of current economic realities. The idea we can repair it all is no different from the idea that we will return to the prosperity seen before 2008 marked the western empire's decline.

I believe you're right on all of that, Richard. We're coming in for a wheels-up landing.