Another Part of the Puzzle - Our Warming Oceans

The playpen of climate change denialists is on temperature change.  They like to cherry pick statistics, sweep the bulk of the data under the carpet, and declare that global warming has stopped.

Here's an example of what the denialist mantra carefully omits. 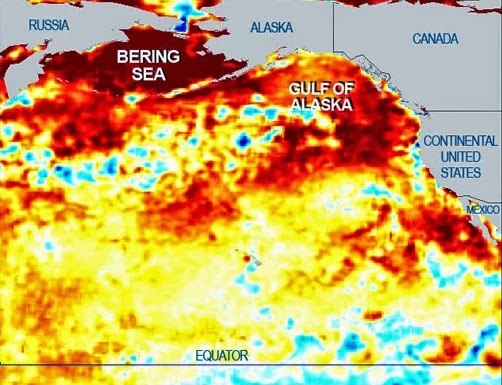 This is a depiction of what's happening in the  North Pacific and Bering Sea.  The red areas such as the Bering Sea are up to 3 degrees Celsius warmer than normal. From the US Pacific Northwest along British Columbia up to the Gulf of Alaska it's 2-3C warmer.

As I've written several times before we in coastal BC are seeing species migrating into our waters that we rarely saw before - fish, marine mammals, sea birds.  This translates into massive schools of sardines, white sided dolphins, even brown pelicans.  We've even had an apparent influx of transient orca perhaps in pursuit of the larger dolphin newcomers. That is the face of climate change.

Here's a pod of transients that has herded a school of white-sided dolphins into the ferry dock at Nanaimo's Departure Bay.

In Alaskan waters newcomers include thresher sharks, skipjack tuna and the giant sunfish or Moa.

What's important is how this warming weather is building up.


Normally storms and winds roll through to cool off the surface of the Northern Pacific, but a weather pattern popped up for a few months in winter 2013 that inhibited those storms from developing, said Nate Mantua, a NOAA research scientist. Then, from October 2013 through January, the weather pattern came back as a ridge of high pressure (the same one connected to the California drought). All of that made the already warm waters in the Alaskan gulf even warmer, a layer about 100 meters thick, Mantua said.
In the spring, warm water started to develop in other Northern Pacific waters, namely the Bering Sea. There's also a chunk of warm water developing off the coast of California.
"You have lots of warm water, and it's due to weather patterns that basically don't take heat out of the ocean," Mantua said. "They are letting the ocean warm up rapidly, and stay warm."
The oceans are heating because the wind patterns have changed in the northern hemisphere.  It's the same wind pattern change that has brought severe drought to the west coast of the US, that brought the Polar Vortex slamming across eastern US and Canada last winter and that gave us a summer of flash flooding from southern California to Burlington to New England.
Some research suggests we should have had a powerful El Nino by now.  The water conditions changed as expected in the central Pacific but the winds associated with El Nino didn't appear to carry that warm water moisture up into California as hoped.
We're just beginning to explore what these phenomena could mean in the long term.  Are El Ninos destined to become less frequent and less powerful just as we're discovering how dependent the ecology of the American southwest is on them?  What happens to all this heat that's accumulating in our oceans?  What does it do to the oceans and all life that lives in or depends on them?
The answer is as brief as it is troubling - right now, no one really knows.
Posted by The Mound of Sound at 9:06 AM

Yesterday, a shark swam into the bay at Burdgeo, Newfoundland.

Was it a native species or an exotic?

Sharks are not found of the coast of Newfoundland until now that is. This shark is usually found in the southern part of the US.

Oh..my mistake. There aren't sharks off the West Coast of Newfoundland. Anyong