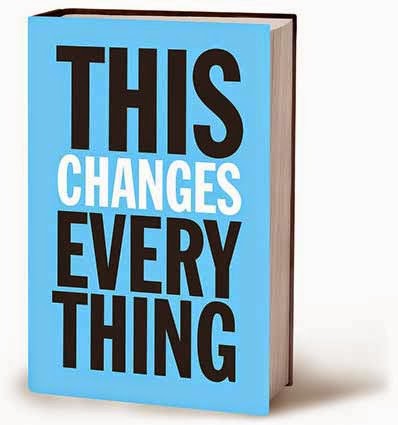 Is this blunt enough for you?

"The planet is headed for a climate catastrophe, and soon. Make that now. Your reaction will be either a quick calculation as to whether you’ll be able to die in time to skip the whole thing, or an appalled realization that your children are in for pain and your grandchildren for a terrible fate."

Heather Mallick has an enormous talent for getting to the point.  She brings that talent to bear as she weighs in on Naomi Klein's "This Changes Everything."

"Meticulously researched and briskly rational in tone, her just-published book is one of the basic texts of the modern era, by which I mean since the Scotsman James Watt invented the coal-fired steam engine in 1776. Hasn’t perdition come quickly on its wee cloven hooves?

"Until then power came from water wheels. With Watt’s device, owners could build factories near the urban poor, hire cheaply, cut prices and stabilize production that used to depend on the whims of weather. Ironically it’s weather that will finish us off now. Capitalism is magical until it isn’t. Skip ahead 240 years and here we are, basically doomed by its profit formula.

[Klein's book] "portrays fossil fuel corporations as victims of their own nature. Programmed like computers, they could not reverse themselves even if they wished to. Only governments can do it. Even then, international free-trade agreements allow corporations to sue nations to stop this, the very reason smart Germany has just objected to Canada’s new European trade deal. Stephen Harper knuckled under to corporations but the Germans are smarter than that.


"This magnificent textbook has already been attacked by people who didn’t read it, apparently for the high school reason that Klein is too famous, or that the book is too hard on the West. But science has spoken. There are 2,795 gigatons (a gigaton is 1 billion metric tons) of fossil fuel reserves already claimed by industry that will be extracted and burned. “We know how much more carbon can be burned between now and 2050 and still leave us a solid chance (roughly 80 per cent) of keeping warming below 2 degrees Celsius,” writes Klein. “That amount is 565 gigatons.”

"That’s 2,795 vs. 565, not even faintly close, and humans haven’t agreed even in principle to slow down. “2 degrees now looks like a utopian dream,” Klein writes, and 4 degrees is reliably said to be “incompatible with any reasonable characterization of an organized, equitable and civilized global community,” a.k.a. life as we sort of know it. Many experts say we’ll go far beyond 4 degrees."

There's the core dilemma.  Survival of our civilization and some measure of decent life for our grandchildren hinges on leaving 80% of known fossil fuel reserves in the ground, unburned.  You begin filling that 80% quota, with the filthiest, highest-carbon fossil fuels - coal and bitumen for starters.  You shut down Athabasca just as you shut down our asbestos mines and production of CFC aerosols.  You do it because you must because people in their masses will suffer and die if you don't.  You do it because you have no right to condemn your grandchildren to a horrible life for the sake of dubious profits today.  You do it because, unlike Stephen Harper, you give a dam about others.
Posted by The Mound of Sound at 12:04 PM

Email ThisBlogThis!Share to TwitterShare to FacebookShare to Pinterest
Labels: climate change, Klein, mallick, This Changes Everything

It sounds like Klein, as usual, has laid out a carefully researched case that presents us with stark choices, Mound.

Apparently, Margaret Wente is in a fossil fog.

It's been a long time, Owen, since I wasted my time reading Wente's contrarian column.

When are we going to address the fact, there are too many people! Humanity thinks it has the right to do anything it pleases regarding other spices on earth including cutting down trees to make paper towels for the rest of the worlds hungry consumption including Canada. So....are we prepared to make stark choices right now? Get out the rags.