There's This Story Making the Rounds... 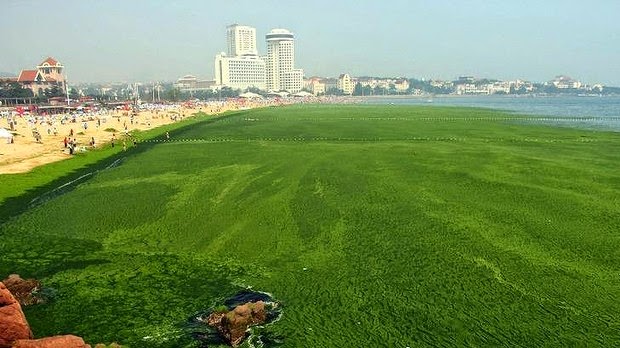 It's an item from Reuters that has been picked up by a number of newspapers, including The Globe & Mail.  It concerns a study that found one species of algae has managed to adapt fairly quickly to warming and more acidic oceans.

What's interesting is that the authors of the study went to great lengths to point out the limits of their discovery and to stress that this wasn't some sort of "all clear" on either the warming or acidification of our oceans.  Having noted that, the reporter went on to simply ignore the cautions and proclaim some sort of miracle.

An essential point that's completely overlooked is that, yes algae or phytoplankton do absorb CO2.  Sure they suck it right up like a sponge.  Great, they're carbon-based life forms.  What the writer ignores is what happens to that absorbed CO2.  It's fixed in these organisms and, being organisms, they eventually die and when they die these tiny little organisms sink to the bottom where they decay and release their fixed carbon into the waters of the ocean depths.  They don't make the acidification vanish.  They're simply a conveyor that carries it to the ocean floor.

We know that algae blooms also suck up enormous amounts of dissolved oxygen.  In large concentrations algae can turn water anoxic giving rise to "dead zones".  None of this makes its way into this "feel good" news report either.

However the giveaway that this is a journalistic con job is apparent in the final two paragraphs.  The writer mentions some "U.N. panel of scientists" that is 95% sure that climate change is man made.  That's followed by this closer:

Opinion polls, however, indicate that many voters believe that natural variations are to blame.  The mismatch between scientific and public opinion complicates a plan by almost 200 governments to work out a deal to limit global warming at a summit in late 2015 in Paris.

There's a journalistic device that pits a powerful scientific consensus based on extensive and ongoing research into every natural science discipline by accomplished and highly-educated experts in those fields against "many voters" whose only qualification appears to be an ability to cast a ballot and then declares a "mismatch".  No, sorry, it's not a mismatch when you pit one powerful consensus based on knowledge, experience and research against a contrary opinion based on nothing.

There is also the huge amount of Methane, on the floor of the oceans.

However since, Harper has given Canada to Communist China as of, Oct 1st. China will start up their coal mines in Northern BC. Harper and China, will also force the Enbridge pipeline through. Between those two monsters, pollution will likely double and the oceans will then not be able, to absorb the fossil fuel poison. The mess the Chinese are making at the tar sands, is horrifying. They have no clue as to, how not to pollute.

Even the fool Harper should be able to see, how gawd awful the pollution in China is? China fouled and polluted their own country. As Harper doesn't believe in pollution? China will foul our country too.

1: Algae blooms can be toxic.

2: Algae blooms might be very deadly, as in world-wide extinction deadly. (Or, they may appear in massive numbers during extinction events.)

The less red-tide, the better. But, it's expected they'll increase in frequency. Hopefully, our fresh water is protected.

Troy, we know our fresh water is imperiled. Harper knew that when he tried to kill off the Experimental Lakes programme. Algae is a huge problem on Lake Winnipeg and we saw what happened on Lake Erie this summer. When those tailing ponds on Athabasca fail the entire MacKenzie River threshold, the third largest in the world, could be at risk of severe contamination. When Enbridge begins causing Kalamzoo River-type disasters across British Columbia, our water security, our health and our safety will also be compromised. We have no one to thank for this more than our diabolical prime minister.