Naomi Klein's Confession - Is It Yours, Too? 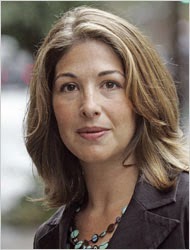 In the run-up to the release of her new book, "This Changes Everything," Naomi Klein has come clean.  For far too long she was in what she describes as a "soft denial" about climate change.  Does this sound familiar?

"A great many of us engage in this kind of denial.  We look for a split second and then we look away.  Or maybe we really do look, but then we forget.  We engage in this odd form of on-again-off-again ecological amnesia for perfectly rational reasons.  We deny because we fear that letting in the full reality of this crisis will change everything.

"And we are right.  If we continue on our current path of allowing emissions to rise year after year, major cities will drown, ancient cultures will be swallowed by the seas; our children will spend much of their lives fleeing and recovering from vicious storms and extreme droughts.  Yet we continue all the same.

"What is wrong with us?  I think the answer is far more simple than many have led us to believe: we have not done the things needed to cut emissions because those things fundamentally conflict with deregulated capitalism, the reigning ideology for the entire period we have struggled to find a way out of this crisis. We are stuck, because the actions that would give us the best chance of averting catastrophe - and benefit the vast majority - are threatening to an elite minority with a stranglehold over our economy, political process and media."

Ms. Klein may be late coming to the party but she's right.  We - you and I - are today deciding our children's fate or we're more likely abrogating our responsibility to our children and theirs, handing it over to people with names like Harper, Trudeau and Mulcair.  Of the lot, Harper is obviously the worst but the other two barely manage to hold the distinction of being "less worse."

While I'll wait until next week when my copy of Klein's books is to arrive before passing judgment, I'm curious about her focus on cutting GHG emissions.  That is plainly necessary, abjectly critical, but is it too narrow a focus?  How does it answer our other pressing existential challenges such as over-population, over-consumption; the loss of biodiversity, particularly the collapse of global fisheries; resource depletion including the global, freshwater crisis; food insecurity and all the ills that spawns from the spread of failed states to terrorism and resource wars?

I'm convinced by the considered arguments of Jared Diamond and others that global warming is but one part of a greater problem and that, if we're going to "fix" any of these challenges we'll have to solve them all.   "Winning" has to be something better than mere survival, eking out an existence, and it has to be for everybody not just the advantaged.
Posted by The Mound of Sound at 9:47 AM

Absolutely agree. I think too that we can't think about it or mentally accept the devastation we've caused without losing our minds a little. Some denial from time to time to get through the day might be healthy. Too much will be deadly.

Hi, Marie. Do you think we won't be "losing our minds a little" maybe a lot more than just a little if we don't get all this sorted out? I look at the enormity of what we're up against and try to imagine the mass epiphany that would compel change. I keep coming up empty.

We lack the courage to do what we know must be done, Mound. It's time to be honest with ourselves.

Honesty is not something we do well, Owen, especially not collectively. We are immersed in a culture that encourages us to discount honesty wherever possible and to believe in the most fanciful notions of ourselves and the world we inhabit.

Mulcair is opposed to FIPA and unregulated expansion of the tarsands. Trudeau Jr. is not. He believes exporting tar to China is the "Canadian economy's future."

You try to claim Mulcair is just as bad as Trudeau, but the facts don't support it. Mulcair is in the center of the economic spectrum where Pierre Trudeau was. (Although Jr. is trying to ride his daddy's coattails to a fake majority...)

The Liberals play the neo-con horror card to get elected, then carry on neo-con economic and anti-environment policies as if there was no election.

Phony progressive activists who aid in abet in this farce instead of demanding the Liberals/Democrats bring about meaningful change are helping to destroy the planet.

"Progressive Liberal" and "Progressive Democrat" are oxymorons unless you wind back the clock 25 years before the Clinton and Chretien sell out of liberal values.

Sorry Ron but to me they're all neoliberal, including Mulcair much as he's trying to change his spots since Andrea's debacle. You don't need to convince me about Trudeau. I made up my mind on him quite a while ago.

At the links below... some useful historical explanation of the political issues you raise and that Klein raises at the two links from DeSmog Blog below:

FWIW...BTW, on failures of political leaders to advocate substantive change... IMO, given the nature of current campaigning methods and realities of very slow change in public opinion, until the public opinion ground has changed significantly, Mulcair and Trudeau would be undertaking political suicide if they were to stake out bold transformative policies on climate and fossil fuels.

Likewise I argue, that Dion's poor communication ability in English was a minor factor relative to the Green Shift in delivering his downfall. IMO.

Until enough of us citizenry organize to move enough of the rest of the citizenry to accept the reality that we need a renewable energy system and must decarbonize our economy in general, I can't fault political leaders for putting the survival of their parties as the first priority.

Unfortunately, it's just very tough to undo 30+ years of neoliberal propaganda in a short time.

Politicians have to stay inside the Overton Window.

We citizens who are informed and active have to move the Overton Window so politicians can come with us.

e.g. Dutch Disease
Mulcair is still paying the price for having been out fairly early on that issue. In my political quarterbacking mode, I think he ought to have waited longer until many more independent reports had been published and then just pointed them out in his comments raising concerns about the impacts on ON and Que manufacturing.

"Until enough of us citizenry organize to move enough of the rest of the citizenry to accept the reality that we need a renewable energy system and must decarbonize our economy in general, I can't fault political leaders for putting the survival of their parties as the first priority."

Hi Sam. I have to disagree on this point. I can and do fault them because they're not only putting their partisan interests ahead of the welfare of the country and our people but they're quietly empowering the forces intent on maintaining the status quo. They're backing the powerful against the weak and, while they'll undoubtedly change sides when conditions worsen enough to spark unrest, by then it will probably be too late to effect meaningful change.

As for Dion, Sam, I thought it was madness for him to try to springboard a major policy like the Green Shift from the opposition bench. That was a policy that required "all of government" resources to introduce, explain and sell to the public. Dion handled it ineptly and his opponents dismembered him for it. He allowed them to seize the narrative, tear it into shreds, well before he was prepared to unveil it. It reflected the criticisms of Dion for being arrogant.

BTW, Sam, thanks so much for the DeSmog links. They offer a terrific summary of Hayek and the rise of neoliberalism which seems to have taken hold as the heterodoxy of modern Canadian politics across the political spectrum. Mulcair's neoliberal instincts are, excepting Harper, as strong as anyone's and possibly more defined than Trudeau's.

As for the Overton Window, I'm not sure that's relevant here. Poll after poll has shown that the Canadian public want effective action on climate change. That issue is already well within the window. It's not a lack of 'public' support they fear. It must be something else. I wonder what that could be?

We have, I believe, different working definitions of how the OW is established.

Here's how, in my view, the Overton Window is set. It's an MSM thing.

In contrast: Public opinion has to be overwhelmingly in one directio to overcome the MSM setting of OW boundaries.

excerpt: "By George Monbiot, published in the Guardian 17th September 2014

Perhaps the most arresting fact about the Scottish referendum is this: that there is no newspaper – local, regional or national, English or Scottish – which supports independence except the Sunday Herald. The Scots who will vote yes have been almost without representation in the media.

There is nothing unusual about this. Change in any direction except further over the brink of market fundamentalism and planetary destruction requires the defiance of almost the entire battery of salaried opinion. What distinguishes the independence campaign is that it has continued to prosper despite this assault.

In the coverage of the referendum we see most of the pathologies of the corporate media.

Despite the rise of the social media, the established media continues to define the scope of representative politics in Britain, to shape political demands and to punish and erase those who resist. It is one chamber of the corrupt heart of Britain, pumping fear, misinformation and hatred around the body politic.

That so many Scots, lambasted from all quarters as fools, frauds and ingrates, have refused to be bullied is itself a political triumph. If they vote for independence, they will do so in defiance not only of the Westminster consensus, but also of its enforcers: the detached, complacent people who claim to speak on their behalf.

excerpt: Despite the rise of the social media, the established media continues to define the scope of representative politics in Britain, to shape political demands and to punish and erase those who resist.


This is a pretty good sentence by Monbiot, that, IMO, describes the OW reality.

Thomas Mulcair faces the equivalent in Canada on numerous issues.