Listen Up. Does This Sound Familiar? 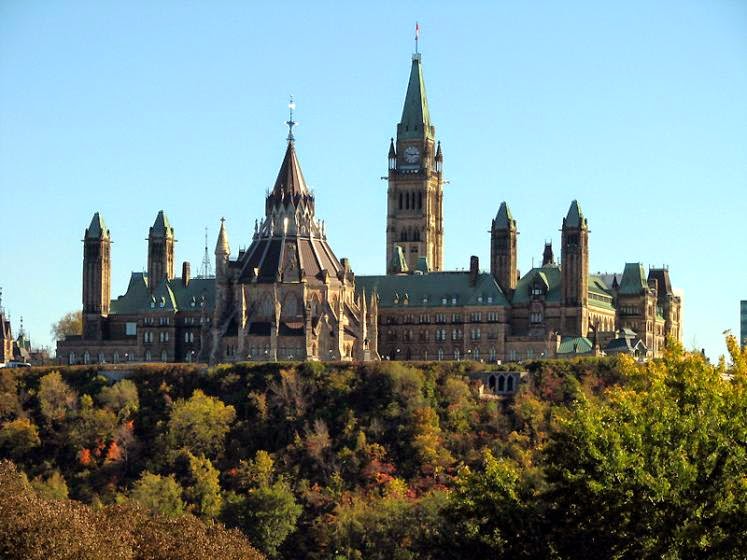 It seems to be an unavoidable part of neoliberalism - the sense of being ruled, not governed by consent.  It's the degradation of democracy, the detachment of the rulers from the ruled that is paralleled by the compression of the political spectrum so that one party becomes largely indistinguishable from the others, all of them in service to the corporate state.

The good news and the bad news is that this modern political caste, grey suits stuffed with wet cardboard, inevitably spawns populist movements but they can either be more democratic or more authoritarian.  As we saw in the 20th century, populism can easily go either way and sometimes with catastrophic consequences.

Richard Seymour describes this phenomenon in play in Westminster where, he contends, the political caste is now seen as an occupying power.  See for yourself if his remarks don't sound familiar.  He's painting a picture of what could lie in store for Canada.

Both the SNP and Ukip have been banging their respective drums for years – Ukip wanting to rescue the British state from the EU and metropolitan pinko elites, the SNP wishing to inter it – but their current traction is unprecedented. Why should it suddenly be that each finds an enthusiastic audience? Why is it that Westminster increasingly appears to significant groups of voters, to not be the “cradle of democracy” as it has sometimes been vaingloriously styled, but as an occupying power? And why is this impasse of representative democracy registering as a crisis of Britain?

...George Monbiot wrote, at the zenith of New Labourism, that Britain had become a “captive state”. It was a society where corporations penetrated the epicentre of government, where politicians of all major parties converged on a single model of statecraft – neoliberalism – and where more and more democratic functions were outsourced to quangos and businesses. This was true enough, and its effects were registered in the ensuing sharp drop in electoral turnout and party membership – the traditional indices of popular political participation. But what we are seeing now may be a deep institutional crisis akin to the collapse of the postwar compromise in the 1970s.

The fact that this is expressed in a national form is neither accidental nor a distraction. Britain has been heading toward a crisis for years. As long as it was a multinational state at the heart of a global empire – one in which Scotland was an enthusiastic participant – Britain had a purpose. And in the postwar era, Westminster was able to deliver certain social reforms on this basis. The memory of these goods is what Gordon Brown invoked when he cautioned against the loss of the British welfare state if Scotland chose independence.

But there are generations of people who have no memory of either empire or postwar social democracy. It is they, overwhelmingly, who absconded to the yes camp; their elders who remained firmly no. This is why the demand for the reterritorialisation of political authority is gaining popular traction. Whether it is devolution in Scotland and Wales, demands for local representation in Manchester and Yorkshire, or the renewed calls for English votes for English laws, there is a recognition on all sides that the centralised power of Westminster is itself part of the democratic deadlock. It is coterminous with a spatial distribution of wealth and power, which is sometimes too simply called “the north-south divide”. As Danny Dorling argues, this divide is getting worse in austerity Britain. Westminster’s distance from ordinary people is physical, social and cultural as well as political, and the most effective populist responses tap into this fact.

Seymour sees in the decline of British democracy the abandonment by the Left of its historical role in driving political policy.  The once centre-left Labour Party was neutered under Tony Blair, shifted well to the right, Blairified if you will.  In Canada we have seen the Liberals part company with their traditional centre-left partners while the NDP, under Layton and Mulcair, shamelessly moved to centrism leaving the left flank of our political spectrum abandoned, empty.  Today, if you're not centre-right, there's really not much for you and so our politics has become estranged from our people.  We have been surrendered to the right.

The English left has no coherent response. Whereas most of the Scottish left found a renewed purpose in the Radical Independence Campaign, English nationalism has only benefited the right. As such, only in localised situations, where a popular revolt has long been brewing against cartel politics – Tower Hamlets or Bradford, for instance – has the left made a breakthrough.

By contrast, the right is filled with energy. Farage speaks of a new constitutional settlement, and the Tories have long appropriated the language of local democracy. This is because they believe local parliaments can be made to compete with one another, thus engendering a race to the bottom over taxes and regulations. Such might have been the hope entertained for an independent Scotland, if it weren’t for the “far left” and “greenies” that Rupert Murdoch warned were empowered by the campaign.

This is the problem. If the right leads the way in reorganising the British state, then the populist energies harnessed to that purpose will only be rallied behind a new elite – one still addressed at Westminster.

I think the lesson is clear.  We need to rehabilitate the left in Canada within the NDP but also as a viable element of the Liberal Party.  If we don't, our very democracy is at risk.

Email ThisBlogThis!Share to TwitterShare to FacebookShare to Pinterest
Labels: abandonment of the left, disaffection., neoliberalism, populism

Re your thoughts on Liberals and NDP and the impacts of neoliberalism on politics/society.

Chantal Mouffe writes useful explanation, IMO, about neoliberalism and how the loss of clearly identifiable political positions that are not centrist, has undermined the Left, and thus how left political parties undermine themselves.

And how and why, therefore, some citizens have therefore turned to the right looking for democratic voice, and in some cases become supporters of extreme right populism.


I think Mouffe's nailed it. I would have expected Seymour to cite her given he's making a very similar argument.

And I think that some of what Mouffe is arguing explains how Presto created the Reform party and how the Tea Party emerged so quickly.

Here are some links where Mouffe explains:

Thanks for the links, Sam. Yes, many of Mouffe's thoughts parallel Seymours and, indeed, my own.

One comment in one of her interviews I found particularly telling. She says that the Left became convinced that there was "no alternative to neoliberalism" and fell incapable of visualizing an alternative. I think that did become the collective wisdom of the Left and, as such, has been embraced by first Layton and, subsequently, Mulcair.

There is no vision today. No one is presenting a genuine alternative narrative. The political spectrum is being so compressed as to be fit for nothing more than technocrats. The party faithful still believe their home team is different, better but it's mainly delusion.

As per your blogging, things are effing bleak.

Here...AB's corporatist politics were made possible in large part by Thatcher's/Reagan's promotion of neoliberalism tenets like gov't bad, market good.

The only way out of this political cul de sac that I've been mulling:

A citizens' movement for democracy based on citizens, that explicitly concerns itself with the public good before private interest, and hence ousting the dominant governance model of corporatism and generating a democratic governance system.

If I've got him right, that's the core idea of his thesis in Unconscious Civilization.

Saul finally got through to me in the preface of the 2005 reissue of U.C., wherein he explained that by corporatism he was referring to the political theory of corporatism for organizing society and governance, not simply the political power of corporations, e.g. to lobby and so on.

And to get a bit more flesh on the notion... So far it seems to me that civic republicanism is the political philosophy that offers the best ethos for what I imagine a citizen movement for democracy might build around.

But for a core foundational agenda, I find sufficiency in the classic meaning of civic virtue: putting the public good before private interest. And hence, the need to call out and oppose corporatist governance.

Our elected rep's have however found themselves enabling a system of political governance wherein their expected to represent the interests. Not the public good per se.

Things are topsy turvy. Saul says corporatism came back and won out over citizen-based democracy after WWII.

Careful Sam, you're skirting the edges of sedition. Harper is watching and listening to what we do and what we say. For the first time in Canadian history we have the RCMP, CSIS, CSEC and Border Security harnessed into a force to monitor dissent in Canada.