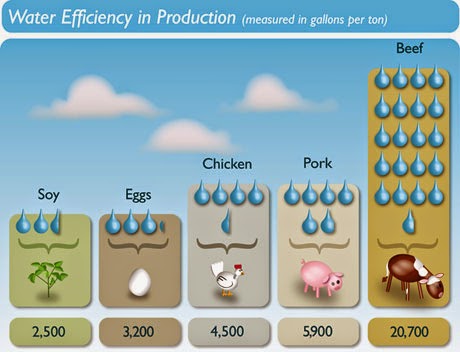 Water-stressed Israel realized this year ago when it recognized that its exports of Jaffa oranges were really exporting "virtual water."  It took scarce water to grow the orange and when it left the country for overseas markets it was full of water.

Fast forward to 2014 and drought-stricken California.  The BBC reports that California farmers are using billions of gallons of incredibly scarce water to grow alfalfa hay destined for China.

The southern Imperial Valley, which borders Mexico, draws its water from the Colorado River along the blue liquid lifeline of the All American Canal.

It brings the desert alive with hundreds of hectares of lush green fields - much of it alfalfa hay, a water-hungry but nutritious animal feed which once propped up the dairy industry here, and is now doing a similar job in China.

"A hundred billion gallons of water per year is being exported in the form of alfalfa from California," argues Professor Robert Glennon from Arizona College of Law.

"It's a huge amount.  It's enough for a year's supply for a million families - it's a lot of water, particularly when you're looking at the dreadful drought throughout the south-west."

Why China?  It's because of China's one-way trade with the United States. Chinese goods reach the American mainland in ocean shipping containers that then have to go back empty.  The glut of empty containers makes alfalfa exports to China cheap, cheap, cheap.  It's cheaper to ship Imperial Valley alfalfa to China than to transport it to California's central valley ranchers.

Not too many publications even mention the word migration, much less evacuation when it comes to California's drought. Hopefully, the USA's major emergency responders organizations such as FEMA have actual plans in place regarding this ongoing diseaster (not likely, though, considering Obama has never undone the damage done by Bush Jr. to the US bureaucracy).

Choice quote: "The fact that the real estate market has not yet collapsed in California tells us that Californians are still living in a state of denial about the future of their water supply."

Wonder when the Wil E. Coyote moment comes for California?
Well, never mind only California, but the whole South West of the USA?

Thanks for the link, Troy. Here's one I came across this morning - a study out of California State University, Fullerton. It concerns 3,000 years of sediment samples taken from Zaca Lake, n-west of Santa Barbara, that are said to reveal a history of multi-century drought in southern California.

As I've mentioned several times in the past I think we don't pay nearly enough attention to all the baked-in vulnerabilities of modern societies to extreme weather events such as recurrent flash floods or extended drought of durations we've never experienced.

I've read that the arrival of white settlers on the prairie occurred during a period of abnormally wet conditions that just happened to be suitable for agriculture. Nobody, it seems, bothered to ask why the prairie was grassland with few and scrubby trees. Had they put two and two together it might have dawned on them that near-drought is the natural state of the grasslands.

As for California, who knows? We'll get an idea of the resilience and adaptability of modern society, that's for sure. If California breaks it'll be cataclysmic for the US. Now, imagine how the Americans will cope with a massive climate migration out of Central America at the same time. Can you say "Festung Amerika"?