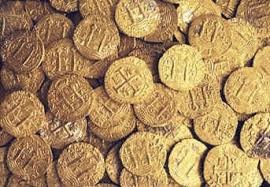 The current decline of the United States from global economic hegemon re-enacts the same path that brought low the previous dominant economies of Spain, the Netherlands and Great Britain.  Here's a brief account of what happened to Spain from Le Monde.

In the 16th century, Spain pillaged the New World and the gold and other precious metals that flooded into Spain turned its merchants into rich rentiers. Their wealth benefitted the nascent industries of the rest of Europe but Spain’s manufacturing sector declined, as did its empire. As the Uruguayan writer Eduardo Galeano wrote, “Spain owned the cow, but others drank the milk.”

It's the same dynamic at play today between the United States and China.  America, flush with wealth and with an appetite for quick, big returns for its rentier class, has abandoned its manufacturing sector and used its wealth to grow the economy of its successor, China.  It's deja vu all over again.

The Le Monde article also has an insightful examination of China's resource rampage underway in Latin America.  It should provide an object lesson for what could lie in store for Canada thanks to the unfortunate trade pact by which Stephen Harper this week indentured Canada to China for decades.

Latin America is still largely missing out on the added value created by industrial processes. The relationship with China is heightening the re-primarisation of economies in the region, now more dependent on the global market and on the primary sector, which creates little wealth and few jobs. Latin America now owns the cow, but it still isn’t getting much of the milk. The growing demand for primary products is exacerbating another problem in Latin America. Andrés Velasco, former Chilean finance minister, recently said: “You look out the window and what you see is a tremendous tsunami of wealth coming your way. And this, which once upon a time might have been welcomed, I view ... as a terrifying sight ... Because this tsunami is going to make your politics very difficult ... and your macro trade-offs very sharp” (5).

He was referring to “Dutch disease”, coined after the discovery of the world’s largest deposit of natural gas in the Dutch province of Groningen, in 1959. Dutch gas exports soared, bringing in huge amounts of foreign currency and causing the value of the florin to rise sharply. The prices of Dutch products on foreign markets rose, while the cost of imports fell, and Dutch industry declined. Latin America today is in a similar position. The influx of foreign currency (linked to exports, but also to investment) has caused regional currencies to appreciate significantly. The value of the Brazilian real rose by 25% from 2010 to 2011, and the finance minister, Guido Mantega talked of a “currency war”, fuelled by China (6). On a trip to Beijing in 2011, President Dilma Rousseff urged China to rebalance trade between the two countries.
Posted by The Mound of Sound at 11:10 AM