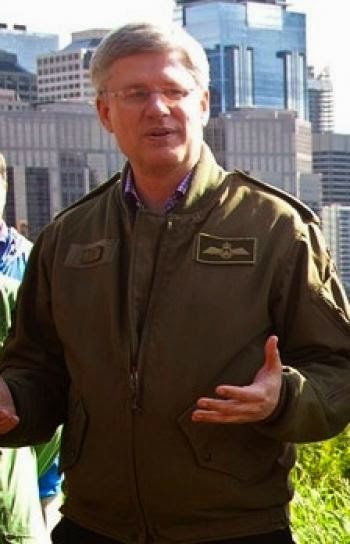 Few are more familiar with stealth that our own prime minister, Steve Harper. He's a master at incrementalism, the dark art of achieving unacceptable goals by a succession of steps, so small and seemingly innocuous that no one really notices in time to object.  Harper is also a master at saying one thing while doing just the opposite behind the scenes.

Harper is all for Canada having a muscular foreign policy and punching above its weight on the world stage or at least that's how he wants red meat Canadians to see him.  In reality, it's all so much self-serving hot air from our prime ministerial blowhard.

For years, Harper has been stealthily defunding Canada's armed forces.  Spending on the armed forces has now reached a low of just 1% of GDP.  That's half of defence spending levels under Pierre Trudeau.  Half.

The armed forces are paying the price of serving a miserly prime minister. Equipment is wearing out.  Replacement programmes are deferred repeatedly if not canceled outright.  Our CF-18s are nearing the end of their useful life and our naval capability is lower than at any time prior to WWII.  A lot of the army's equipment is beat up from a decade of service in Afghanistan.  To respond to all of this, Harper has gutted defence spending.  Neat trick, eh?

So it sounds like, when it comes to Canada standing up to the Russian Czar, Vlad, someone has painted himself into a corner.  Think Steve is going to levy big taxes to pump up the defence budget?  Think again.

Besides, there is reason to question the resolve of the NATO alliance in facing up to Russia.  Old NATO, the original crew from the days where we squared off against the Warsaw Pact, is still doing the heavy lifting.  The new kids, who actually used to make up the Warsaw Pact but have since changed sides, haven't shown much interest in contributing to NATO's adventures whether in Afghanistan or in the skies above Libya or elsewhere.  These countries also live in the shadow of Vlad Putin and some of them haven't forgot what happens in their neighbourhood when you get caught on the wrong side of the Kremlin.

Some think this rapid reaction force is another NATO pipe dream:

Steve Saideman, an expert on NATO, is skeptical about how the force would work, given previous missions where countries have insisted on maintaining control over their own troops and imposed restrictions on what they could do.

That was the experience both in Libya, where some countries refused to conduct risky air-to-ground attacks, and in Afghanistan, which saw a handful of countries like Canada, the U.S., Britain, France, the Netherlands and Denmark do most of the fighting.

"I have a hard time imagining a rapid-reaction force being rapid," said Saideman, who is chair of the Paterson School of International Affairs at Ottawa's Carleton University.

"I don't feel confident they'll be able to overcome the problems that have existed and have been baked into NATO."

Saideman is also unconvinced that Harper is really willing to put his money where his mouth is to cover the considerable costs of maintaining an all-forces contingent to NATO's new standing reaction force.

It sounds tailor-made for a phantom force funded with non-existant dollars, in other words - Harper stealth.

Anyone who actually served in the military, Mound, knows that the cowboy from Etobicoke is all hat and no cattle.

...and a dandy flight jacket too, Owen, complete with imaginary wings.