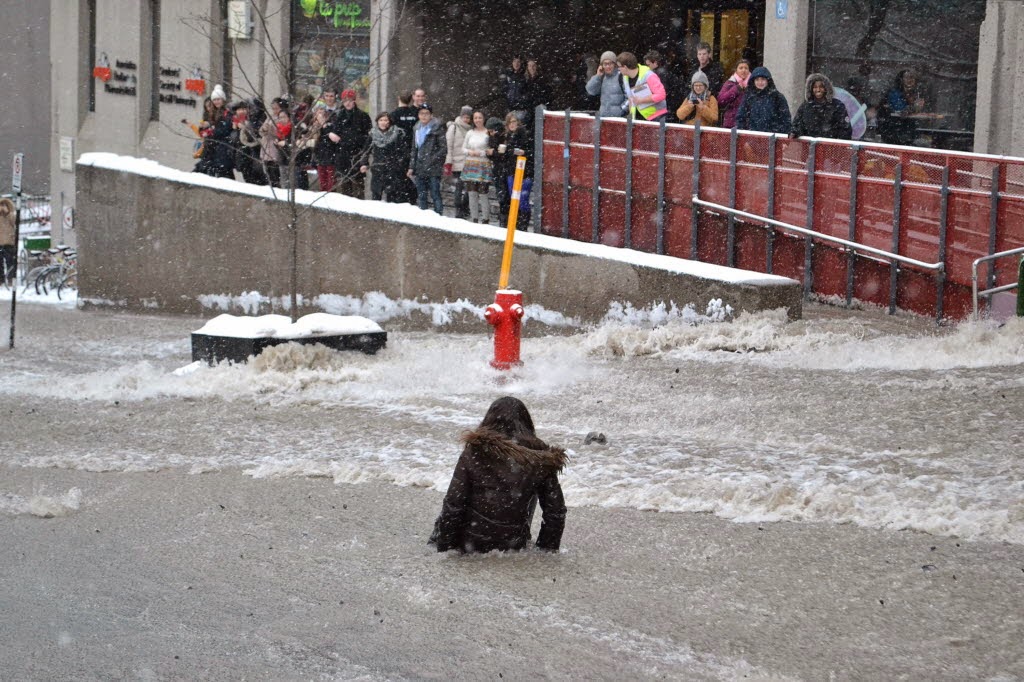 "Resilience."  It's the new climate change buzz word.  It applies to individuals, communities, institutions, and infrastructure.

Resilience is the ability to bounce back from repeated climate change impacts. It's the ability to withstand repeated floods, for example.  That might require making your home resilient by having it mounted on stilts well above ground level.  It might entail constructing new floodways to channel flash floods away from communities.

Resilience planning was one topic of discussion at the 2014 World Climate Week summit in New York.

It's not just the Third World that is taking up the issue of resilience.  In the United States, the Department of Homeland Security is exploring ways of protecting the infrastructure of American cities from climate change impacts.


"Increasingly, we've moved ...from a security focus to a resiliency focus," said Caitlin Durkovich, assistant secretary for infrastructure protection at Homeland Security, an agency better known for its fight to curb terrorist threats.
Durkovich spoke Thursday on a panel at the Rising Seas Summit, a three-day conference organized by the U.S.-based Association of Climate Change Officers to discuss tools and ideas on building resiliency, particularly against rising sea levels.
In the aftermath of 2012's Hurricane Sandy, which devastated large swathes of the Northeastern U.S and caused over $60 billion in damages, Durkovich said her department reviewed the task of rebuilding with a new focus on "how to think about baking in resilience from the get-go."


To that end, she said, she has assembled a team of specialists, including city planners, in conjunction with the National Academy of Science to develop better tools for planning.
...the Portland, Maine area is being looked at in terms of risks from rising sea level, how floods might be mitigated and how to deal with saltwater intrusion into what had been bodies of fresh water. The results will then be shared with other coastal communities, she said.
California, which has the country's second longest coastline after that of Alaska, also is looking increasingly at climate change adaptation and resilience, said fellow panelist Ken Alex, senior policy advisor and director of the California Governor's Office of Planning and Research.
He said California derives about $1 billion annually from its emissions cap-and-trade program, which sells greenhouse gas emissions permits, and the state has decided that all that revenue must be spent in ways "linked to resilience."
You'll find no comparable effort underway in Canada.  Ottawa could care less.  It doesn't want to discuss climate change impacts or resilience planning.   That costs money, potentially up to a trillion dollars or more, and the Harper regime, having defunded the federal government, now quests for a balanced budget.

Which means the problem devolves to the provinces.  At least that's what I had expected when I contacted my own town's municipal engineer.  We're a seaside resort town.  We depend on summer tourism revenue.  We have these amazing, shallow beaches where kids can frolic safely in the salt water.  Parents love it.  It brings them here in droves.

So what, I asked, is being done to prepare for sea level rise?  I fully expected to hear of some provincial task force underway to guide all the coastal communities, including Vancouver and Victoria, on what to expect and preparations for meeting the impacts - resilience.  No, sorry, nothing of the sort.

Our provincial government is standing idle, leaving it to our municipalities to do their own studies and planning.  Apparently the none-too-liberal Liberal government doesn't want to find itself in a spot where it's asked to help fund resilience initiatives for coastal communities.

It's this "head in the sand" approach that is going to backfire on us and it's not just a coastal problem.  Across the country, long-neglected infrastructure is failing.  Much of it is old and in poor upkeep and now it has to withstand climate change impacts for which it was never designed.  It's a looming, trillion dollar nightmare.

We're not a society that remains capable of raising that kind of money.  We won't accept the tax burden.  The idea that infrastructure spending is an investment in our communities, our safety and our prosperity into the future is too ethereal for us, an affront to our need for instant gratification.  Let someone else do it, at some other time.  Kick it down the road.

Unless we manage to kick this selfish mentality, we have already become part of a dying society.  Go to the Third World.  See what happens when infrastructure collapses.  Watch torrents of freshwater erupt from the streets while there's nothing to be had from the taps.  Encounter washed out bridges that don't get repaired.  Experience rotating power outages, streets plunged into darkness.

We're left to repair an overpass or to fix a broken water main when one fails but that does nothing to overhaul an entire system that is in decay.  That is merely putting out fires, not preparing for the future.