Pope Warns We May Already Be In "Piecemeal WWIII" 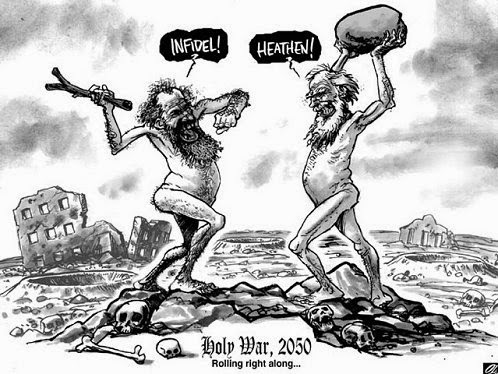 Has the world already stumbled into a third world war?  Pope Francis thinks that could well be the case.  Denouncing war as "madness", the Pope made his remarks while visiting Italy's largest military cemetery.


In Saturday's homily, standing at the altar beneath Italy's fascist-era Redipuglia memorial - where 100,000 Italian soldiers killed during WWI are buried, 60,000 of them unnamed, the Pope paid tribute to the victims of all wars.
"Humanity needs to weep, and this is the time to weep," he said.

"Even today, after the second failure of another world war, perhaps one can speak of a third war, one fought piecemeal, with crimes, massacres, destruction," he said.
I don't know about you but I'm thinking Francis might just be right.  What's going on today around the world, the brutal chaos, the clash of state and non-state actors, the "new war" type of warfare is very much in keeping with the models of warfare for the 21st century canvased in a recent course I took from the war studies department of Kings College London.

Today's warfare sees parties mix and blur, sometimes drifting in and out of conflict, with often ill-defined objectives or no particular purposes at all. Conflict has become more fluid, actors are apt to change sides or vary allegiances.  The distinctions that once separated crime, terrorism, and insurgency are increasingly meaningless.

The Afghanistan debacle demonstrates how ill-prepared the West is for this transition in warfare.  Despite our claims to the contrary, we went into Afghanistan to fight a conventional military war - heavy on firepower, weak on troop strength.  It wasn't for lack of bombs or strike fighters, tanks, artillery or any of the other accoutrements of modern warfare that we failed to defeat a bunch of illiterate farm boys equipped with Korean war vintage rifles and light machine guns.  We failed because we stupidly never had remotely enough soldiers to fight their war and because they chose, not stupidly, not to fight ours.   At the end of the day the only war that mattered was theirs, the only one still in play when the clock ran out on our war.

Wars of theology seem to have supplanted wars of ideology as the new expression of nationalism.   The rise of religious fundamentalism as a driving force even in the halls of grand palaces and national legislatures has introduced a new element of zealotry and an acceptance of brutality that might have been unacceptable previously.  Who needs morality when you follow the fierce burning light of religious extremism whether Muslim, Christian, Judaic, Hindu or whatever?

Warlordism and tribalism often frustrate both the ability to conduct an effective war and any prospect for achieving peace from conflict.  We in the West have exacerbated those tensions by the manner in which we carved up so much of the world as our spoils of war, drawing lovely neat borders to suit our convenience and without concern for the ethnic realities of the people we were corralling together.

In contemporary warfare before the turn of the 20th century, fatalities were roughly 85% military, 15% civilian.  A century later those ratios had been reversed.  Today the brunt of warfare is inordinately borne by civilian populations as the laws of war intended to protect them are routinely flouted by non-state actors and state actors alike.  Even in Canada we sit by complacently as our allies deliberately target civilian populations with impunity.  They do it and, by our silence, we condone it and become complicit in it.

Morality has gone straight out the window.  There are more failed and failing states, ever more illiberal democracies (we're not all that far off either) ushering in a new era of authoritarianism.  And we have collectively arrived at this tragic place just at the moment when we must decide if mankind can find some means of equitably and peacefully sharing this biosphere, our one and only habitat, through what promises to be an increasingly challenging and dangerous century.

Pretty much sums it up. IMHO, it's not a World War III, as it is a return to insurgency.

Modern Guderian-style war is incredibly destructive with today's technology, compared to 1945's, which was bad enough. It also goes through ordnance and supplies at an incredible rate — which means that the months-long efforts we used to see with massed armies cannot exist today.

So, now we have "4G" 'asymmetrical' warfare. Check out Chuck Spinney's site. He was one of Col. Boyd's "Acolytes". Has thoughtful observations.

Also reminds me of a series of SF stories by Mack Reynolds, called "The Frigid Fracas" series. Reynolds was very concerned about the implications of the advent of the caste system in the US as wealth accumulated to the 1%.

Very well stated! Thanks for this!
LD

Hi, Ed. Thanks for the links. Both were quite interesting. Although I don't read fiction and am falling seriously behind in my non-f reading pile, I did order a Kindle pack of Mack Reynolds for the budget busting price of $0.91. At that price it can't hurt to have a glimpse.

A lot of Spinney's wisdom is pretty hard to dispute. Wisdom, however, is a heavily discounted commodity these days.

@ LD - thanks and you're very welcome.