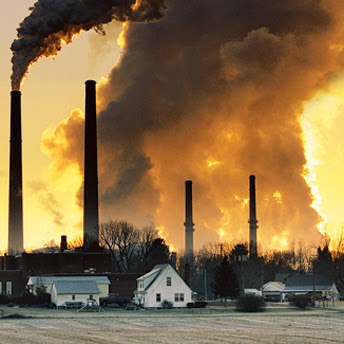 Earth may have had just about enough of us.

One indication that we may be outstaying our planetary welcome is the spike in atmospheric greenhouse gases in 2013.  Part of that reflects our increased use of fossil fuels.  The other part is more worrisome by an order of magnitude.

The Earth, it seems, may have had its fill of absorbing our emissions.

Concentrations of nearly all the major greenhouse gases reached historic highs in 2013, reflecting ever-rising emissions from automobiles and smokestacks but also, scientists believe, a diminishing ability of the world's oceans and plant life to soak up the excess carbon put into the atmosphere by humans, according to data released on Tuesday by the United Nations' meteorological advisory body.

The latest figures from the World Meteorological Organization's monitoring network are considered particularly significant because they reflect not only the amount of carbon pumped into the air by humans, but also the complex interaction between man-made gases and the natural world.  Historically, about half of the pollution from human sources has been absorbed by the oceans and terrestrial plants, preventing temperatures from rising as quickly as they otherwise would, scientists say.

"If the oceans and the biosphere cannot absorb as much carbon, the effect on the atmosphere could be much worse," said Oksana Tarasova ...chief of the WMO's Global Atmospheric Watch program.

The long and the short of it is that, if our biosphere is losing its capacity to backstop us on our carbon emissions, then even the most radical emissions reductions targets - which we're not even close to meeting - are dangerously inadequate.

"It's the level that climate scientists have identified as the beginning of the danger zone," said Michael Oppenheimer, a Princeton University professor of geosciences who was not involved in the WMO report.  "It means we're probably getting to the point where we're looking at the 'safe zone' in the rearview mirror, even as we're stepping on the gas."

The WMO report also incorporated data on ocean acidification stemming from our greenhouse gas emissions.  The data shows the rate of acidification is unprecedented over at least the last 300,000 years.  Given that every second breath you take represents oxygen generated by our oceans you might want to pay attention to this little problem.
Posted by The Mound of Sound at 11:10 AM

Thanks for this Mound. Saw this on the BBC site earlier this morning, on the CBC site it is tucked away at the bottom of the page as the new i phone is obviously far more important.
I really think that we, as a species, have now gone too far and can only work at survival the best way we can. There is no government in the world that is taking this seriously enough, it's all about the economy eh. There seems to be no recognition of the fact that without a livable environment there will be no economy for anyone.
Many thanks for your continuing articles Mound, yours is one of my 'go to' sites every day.

Hi, Inse, and thanks for your kind words. I really wish there weren't reports like these that needed to be posted. I have very little confidence that the political will exists, globally, to deal effectively with climate change or the other existential challenges facing our civilization.

Our continued progress as a now global civilization is dependent on how we treat our commons be that our atmosphere, our oceans, etc. Without healthy commons, we're not going to make it. Yet we're still not willing to accept the atmosphere as a resource belonging collectively to all life on Earth (and not just human life either).

Here's the proof. Several years ago two groups of researchers, each working independently through different systems, both calculated the carbon carrying capacity of our atmosphere. In other words, they worked out just how much more greenhouse gas we could put in the atmosphere if we were to have a hope of staying within the 2C target.

There wasn't enough residual capacity to keep going as we are for very long. This raised the question of which nations should get how much of that remainder?

The Third World countries were willing to spot us the half of the capacity we in the West had already used up. All they wanted was for the remainder to be apportioned on a per capita basis. In other words, the carbon budget for each Rwandan would be the same as for each Canadian or American.

To do that, however, would demand an almost immediate decarbonization of the West - our industries, our economies, our societies. Needless to say that idea of treating the atmosphere as a commons, a truly shared resource, was killed off in short order.

This business as usual approach we have adopted for the atmosphere sets the course for how we treat every other commons - the oceans, global fisheries, fresh water, biodiversity - you name it.

We're like a 3-pack a day smoker deciding to go gluten-free to restore his health.