"You've got to deal with the fact that it's happening.
And what are you going to do with those of us on the edge?"

All along the ragged shore of Chesapeake Bay and the Atlantic coast of Delmarva Peninsula, north into New England and south into Florida, along the Gulf Coast and parts of the West Coast, people, businesses and governments are confronting rising seas not as a future possibility.  For them, the ocean's rise is a troubling everyday reality.

In cities like Norfolk, Va., and Annapolis, Md., coastal flooding has become more frequent.  Beyond the cities, seawater and tidal marsh have consumed farmland and several once-inhabited islands.  Here in Accomack County alone, encroaching seawater is converting an estimated 50 acres of farmland into wetlands each year...

In many places, including much of the U.S. Eastern Seaboard, an additional factor makes the problem worse: The land is sinking.  This process, known as subsidence, is due in part to inexorable geological shifts.  But another major cause is the extraction of water from underground reservoirs for industrial and public water resources.  As aquifers are drained, the land above them drops...

The rich and famous are not spared either.  Last year, Vanity Fair published an article exploring what's already happened to the beachfront homes of Hollywood's big names in Malibu. 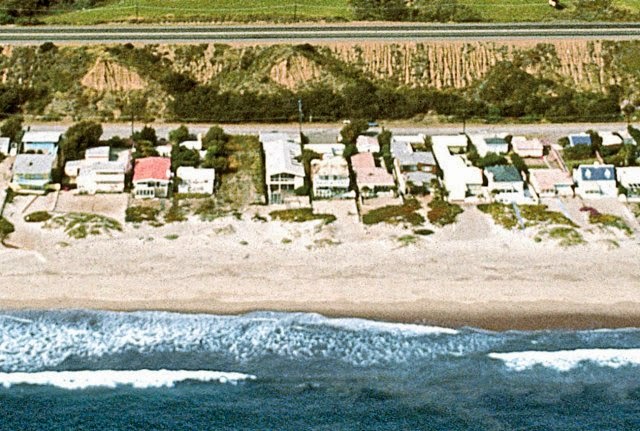 The stars have lost their fight to save their magnificent beach and now they're fighting to defend their homes - for a while longer. The "old money" homes of Nantucket aren't being spared either. 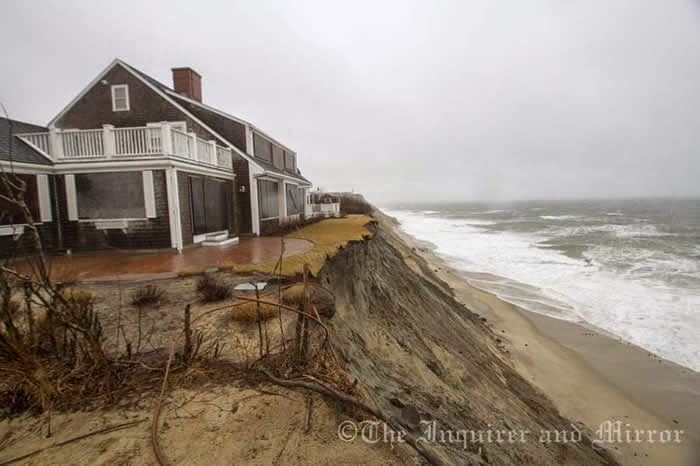 Those pictures powerfully attest to the fact that no one is immune to the effects of climate change, Mound. Perhaps such graphic images will shake up the complacency of the well-to-to who probably cannot yet conceive of a world where even money and power cannot withstand the forces of nature.

I was watching that "home & garden" channel yesterday. I think the show was "beachfront bargains" or something like that. It showed a couple who plonked down 400-large on a beachfront condo in the Florida keys. I couldn't understand what they were thinking. Then I found a report this morning that the keys are the third most vulnerable area to sea level rise in the US.

You would have thought the property, so obviously vulnerable to sea level rise and storm surge, would be unsellable. Apparently not so long as you can make enough people believe that climate change is a hoax.

There are somethings that money can't buy, Mound. And only communal action will change the outcome.

The most vexing aspect of sea-level rise erosion, Owen, is that most remedial efforts backfire. The wealthy Nantucket homeowners tried to install features that would protect their beaches from erosion but it was realized they would cause even greater erosion to other areas. Miami has had the same experience.

We've gone beyond the point of no return on sea level rise. The only question is the rate of onset which is something we can influence to a very limited degree. The oceans are warming, the polar ice caps are melting and we're draining our fossil water, our aquifers into the seas.

I spoke with my town's city engineer about studies the muni has commissioned into sea level rise and what areas will have to be surrendered to the sea. One area of really nice homes has been designated for no construction of any sort, not even a garden shed. If a house is lost, say to fire, there'll be no new building permit for that lot. Demolition permits, however, they can readily obtain.

When people like Tony Abbot continually repeat there isn't any such thing as an environmental
problem and dullards such as a CEO of a vitamin company supports Abbot, one doesn't have to wonder why not much is taking place to truly minimize global death. Harper and Abbot totally love each other so my Australian friends say. The funny thing is, God will not provide. As the saying goes, God looks after those who look after themselves and that doesn't mean stealing. Putting bricks in the wall is 100 times better than getting ones name on a brick. Why,, the little-o-city of Medicine Hat in Alberta...."the gas city"....has now three wind turbines in full production as of last week. If a population of 61,000 can do it with huge amounts of gas to use, why can't the rest of the country thereby setting an example?

Well, one cloud with a silver lining anyway. With luck maybe we can stick the deniers with the beachfront property?
"You don't believe in global warming, but you can believe in these amazing deals! Step right up!"

Hey, PLG. It does make you wonder, doesn't it? Thing is, they'll start howling for government bailouts once the water comes over the threshold and, being "connected", those funds will come in as fast as the rising sea. Damn but we need a revolution!