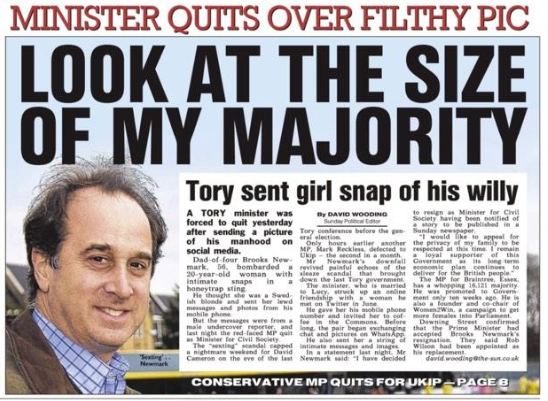 Why is it always the dweebs?  Conservative P.M. David Cameron's Minister for Civil Society (and Dick Pics), Brooks Newmark, has resigned in disgrace.   The Belgravia resident, father of five, was caught in a tabloid, social media sting.  Newmark thought he was sending dick pics via twitter to an ardent admirer who was, in reality, a tabloid reporter.

Newmark has always been a vocal advocate of the Tory party boosting its appeal to women. He is a founder of the Tory campaign body, Women2Win, which works to help women become Tory candidates in the hope of increasing the representation of women in the Conservative party in parliament.

Newmark is co-chair of the group, and is often quoted responding to the party's problems with appealing to - and representing - women. He is also a figure Tory MPs often refer to when attempting to defend their party's attitude to women, ie. a male Tory MP who bangs the drum for women's representation. Now they will no longer be able to use Newmark for this, at least for a good while, and he will inevitably become less of an appealing face of Women2Win and solving the Conservatives' "women problem" in general.
Posted by The Mound of Sound at 11:14 AM

Well, at least he resigned, Mound. One wonders what would have happened had he been a Harper cabinet minister. Perhaps he would have only been required to blubber à la Calandra and say he couldn't guarantee it wouldn't happen again.

I doubt that he had any choice in his resignation, Lorne. Cameron is already in trouble with British women and this guy just made Cameron's dilemma that much deeper.