You're Paying for Those Pot Holes Whether They're Fixed or Not 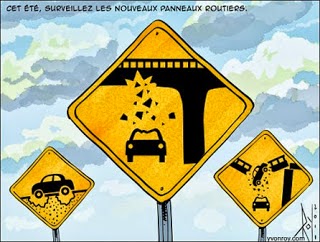 An illustration of the problem comes from a forced retreat of the "just in time" manufacturing sector.


Companies like Whirlpool and Caterpillar are making costly additions to their otherwise sinewy supply chains to compensate for aging U.S. roads that are too potholed and congested for "just in time" delivery.
Some opt to keep more trucks and inventory on the road. Others are leasing huge "just in case" warehouses and guarded parking lots on the edges of big cities. All that activity raises costs, which are expected to increase even more if roads are allowed to deteriorate further and an improving economy boosts traffic.
Whirlpool, for instance, has set up a network of secure drop lots outside Chicago, Milwaukee and Minneapolis. A washing machine that used to go from regional distribution center to local distribution center to customer in one day now sits overnight in a parking lot.
It "adds an extra day of lead time, which means extra inventory," said Whirlpool Corp logistics chief Michelle VanderMeer.


Then there are the parking lots and the guards. “That’s real physical infrastructure and security that we have to pay for," she said. "We’d rather be investing our money elsewhere," she added, declining to estimate Whirlpool's expenses.
Last summer, as Calgary flooded, the World Council on Disaster Management held its annual conference in Toronto.
Dr. Saeed Mirza, emeritus professor at Montreal's McGill University specializing in structural engineering, added that the monumental infrastructure costs accumulated over decades of negligence have left Canada particularly vulnerable to catastrophic events.
"The frequency and intensity of these events has been increasing at an escalating rate and what was a one-in-100-year event at one time may become the norm," he said.
Mirza estimated that Canada's infrastructure requirements have reached a cost of about $1-trillion, while a recent survey by the McKinsey Global Institute earlier this year stated that worldwide infrastructure needs are about $57 trillion.
Canada needs a major infrastructure overhaul.  The premiers are trying to engage the federal government but Harper thinks a $50 billion programme spread out over ten years should suffice.
Welcome to Third World Canada.
Posted by The Mound of Sound at 8:59 AM