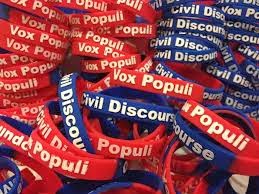 Some thoughts for this, Labour Day.

The voice of the people.  Oh, how long has it been since that really meant anything?  In Canada and many other advanced countries, polls show that people are being governed without much if any regard to their views, their concerns.

It's sort of like standing, waiting at the civic bus stop for a bus that just keeps passing you by.

The American people utterly loathe their federal government, their Congress. Does it matter?  Hell no!  The vox populi has been discounted to the point of near total irrelevance.

There used to be a notion that at the heart of democracy lay the consent of the people to be governed.  To the extent that ever meant something it has been superceded by the ascent of neoliberalism and the corporatist state.

You get to vote and that's about all you get.  There is no longer much of a role for the vox populi.  There's still a vox, a voice alright and it is reaching the ear of the political or ruling classes only it's not your voice.  It's the voice of energy and commerce and high finance that has the ear of those you supposedly elect to office.

Think I'm kidding?  Go back four years to the reign of Ignatieff.  Do you remember when he summoned a "thinkers' conference" to map out a new strategy for a Liberal Canada?  The speakers list spoke volumes for it was massively dominated with CEOs and "management consultants."  Ignatieff wasn't there to formulate policies that would resonate with the voting public, solutions to their needs and concerns.  His focus was Bay Street, not Main Street.  As the Ignatieff Liberals turned their backs on ordinary Canadians, so did ordinary Canadians turn their backs in the next election sending the Liberals from Sussex Drive to Stornoway to Motel 6 out on the Gloucester highway.

Your vote used to mean something back when parties offered up a real spectrum of vision and policy.  You knew what made one party distinct from the others and they worked to champion policies that might suit the voting public.

Today our body politic lies on the life support of neoliberalism.  Iron lungs all around.  Even the NDP has embraced neoliberalism.  There's a term for what's happening.  It's called "depoliticization."  Politics is being shut down, its place taken over by grey suits stuffed with wet cardboard.  Administrators, not leaders. Mere technocrats, doing sums.  The public, quite conveniently for the corporate state, is disengaging, tuning out. Why bother if no one will speak to your concerns?  Why bother if no one hears your voice?  Even before you begin to tune out you're already out of the loop.

How then do we reverse this?  How do we get their ear?  How are we to get our voices heard by those we elect, those who are duty bound to serve us?  How do we make them responsive to our concerns, our needs?

How indeed?  I don't know.  I do know that we need to get these people we elect to listen to us and that means they need to stop listening like attentive lap dogs to those who do not elect them.  We need to drum into their heads the prescient words spoken by Teddy Roosevelt more than a century ago.  These words:

...every special interest is entitled to justice but not one is entitled to a vote in Congress, to a voice on the bench, or to representation in any public office.  The Constitution guarantees protections to property, and we must make that promise good, but it does not give the right of suffrage to any corporation.

...The citizens of the United States must effectively control the mighty commercial forces which they have themselves called into being.

There can be no effective control of corporations while their political activity remains.

Wresting political control away from these commercial forces may be the key to reclaiming our democratic freedoms.  The thing is I just cannot see that happening under either Trudeau or Mulcair or any other Liberal or New Democrat.  Like others I'm coming to accept that if we cannot rehabilitate the Liberal and New Democratic parties, we need to stop wasting our efforts and put them into building a new party, a genuinely political party, one that speaks for Canadians and speaks to their concerns.  It's pointless to seek solutions in neoliberalism.

Related to your thought that our voice is not listened to, Mound, I am always reminded of the arrant arrogance of politicos when they dismiss a lack of support for one of their initiatives:

"We have to find a way to better communicate our message."

Never for a moment does it seem they consider the possibility that the people might be right and they might wrong.

That's certainly true enough, Lorne, and it does speak to the growing gap between those who govern and those they govern. That is the gap of neoliberalism and it inevitably leads to illiberal democracy.

One problem with any new party is that as it rises, it will face the same pressures as all the old parties. If it is not structured in a way which allows real control from the grass roots, it will inevitably sell out. We see it happen in Europe over and over; in places like Germany the party system is rather more fluid, but every time a new left-ish party rises, a few years later its leaders have joined the status quo.

Mechanisms for direct democracy are needed. One I'm currently interested in is
www.loomio.org
I was interested to realize that the loomio tool has started to get used extensively by the new Spanish left party Podemos. I'm eager to see whether this will keep the party closer to the activists that are building it.

I can certainly see how a system like loomio could help, PLG. The hurdle I see is in getting enough Dippers mobilized to create a new party of the Left. That part of our political spectrum has been abandoned and, with it, we've lost our political equilibrium. Despite that I'm skeptical that the will exists to rebuild the Left. If only..

The dreams, needs, wishes and direction of the population of Canada are currently irrelevant.

Elections have devolved to gaming of voting population, grooming of electorate or 'the base' or outright fallacy and fraud.

Reality is so suspended, distorted or denied that er have twits like Mark Adler or Rob Anders or Brad Butt being nominated, supported and elected.. No exemplars need apply.

Our PM counts leveraging either his wife, his wig or a chinchilla as election promise.. while ejecting and punting budget items to later years in search of an election year budget surplus. The day mainstream media call this experimental juvenile economist gasbag for incompetance, arrogance, duplicity and secrecy, I'll fall from my chair. What his odd idolation of Israel is about must be related to his mysterious evangelical religious leanings. But one musn't mention this stuff publicly.

I care nothing of the inclinations of his tormented wife.. or his unelected secretive room mate Ray.. but only a coward or sociopath in today's era maintains complete fiction on the level of Stephen Harper.

Trudeau? Mulcair? One hopes as the only visible alternatives they are somewhat more real and connected to the reality of Canada and Canadians. Trying to view John Baird, Jason Kenney, Tony Clement, James Moore or Peter MacKay as legitimate future leaders is laughable.. their secrets, failures, fallacies and baggage approach those of Harper

I don't know that we need new parties.. but we need fumigation & simplistic rules that are functional and realistic.. not the constant arcane contravention, obstruction, deviation and duplicity Harper, his PMO and hordes of salaried lawyers cook up

Perhaps politics should be like jury duty or conscription. Two years at suitable recompense and you are done. Carpenters, farmers, housewives, loggers, teachers, biologists and caretakers please apply or be nominated.

"To figure out who rules, simply identify who you cannot criticize"
Voltaire
Politics is now about power. If not a new party we need to restructure our parliamentary infrastructure and curtail the power that the PM and PMO office has for starters . We need real checks and balances. The fact that a man like Harper can become our PM reminds us everyday that there is something seriously wrong with our democratic system and our culture. We shouldn't after an election cross our fingers and hope our newly elected PM
is really only interested in pursuing power.

@ Sal. I just posted an item "breaking the cartel" that addresses the failures of our corporate media to hold any of our politicians to account once in power.

@ Pam. I learned a lot from the failures of Obama, enough not to hope that either Mulcair or Trudeau will really sweep aside the excesses of Harper. One look at their shallow, constipated platforms is enough for me to have near zero confidence in either of them.

Mound
If you are right then we are in much worse shape then I thought, but Trudeau and Mulcairs vocal abandonment of Palestine may be the tip off to a big part of who they would be as PM's. My idealism is taking a beating.