How South Americans are Killing Their Environment 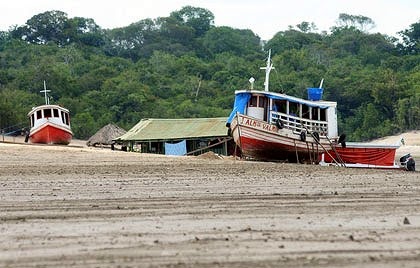 In some places, cutting down trees can have huge consequences.  In South America, the impacts are especially far-reaching.  Deforestation has picked up again in the Amazon.  That, in turn, is causing havoc to the region's hydrological cycle, triggering severe drought.

The unprecedented drought now affecting São Paulo, South America’s giant metropolis, is believed to be caused by the absence of the “flying rivers” − the vapour clouds from the Amazon that normally bring rain to the centre and south of Brazil.

Some Brazilian scientists say the absence of rain that has dried up rivers and reservoirs in central and southeast Brazil is not just a quirk of nature, but a change brought about by a combination of the continuing deforestation of the Amazon and global warming.

This combination, they say, is reducing the role of the Amazon rainforest as a giant “water pump”, releasing billions of litres of humidity from the trees into the air in the form of vapour.

...Deforestation all over Brazil has reached alarming proportions: 22% of the Amazon rainforest (an area larger than Portugal, Italy and Germany combined), 47% of the Cerrado in central Brazil, and 91.5% of the Atlantic forest that used to cover the entire length of the coastal area.

...As long ago as 2009, Antonio Nobre, one of Brazil’s leading climate scientists, warned that, without the “flying rivers”, the area that produces 70% of South America’s GNP would be desert.
In an interview with the journal Valor Economica, he said: “Destroying the Amazon to advance the agricultural frontier is like shooting yourself in the foot. The Amazon is a gigantic hydrological pump that brings the humidity of the Atlantic Ocean into the continent and guarantees the irrigation of the region.”

“Of course, we need agriculture,” he said. “But without trees there would be no water, and without water there is no food.

“A tonne of soy takes several tonnes of water to produce. When we export soy we are exporting fresh water to countries that don’t have this rain and can’t produce. It is the same with cotton, with ethanol. Water is the main agricultural input. If it weren’t, the Sahara would be green, because it has extremely fertile soil.”

Drought visits all manner of consequences on Brazil.  Sao Paulo, a city of 9-million, is facing the prospect of running out of water within just two or three months.  Brazil has also been the second-largest hydroelectric power generator in the world.  Now it's power infrastructure undermined by drought, Brazil is trying to shift to wind power.  In the meantime, as Brazil's hydro-electric generation falters, the country is left to turn to fossil fuel-powered generation.

As for the future of the Amazon, the fear is that deforestation could so alter the environment that the rainforest dries up, dies, and then begins its own natural feedback mechanism - wildfires.  Unlike temperate forests, the trees of the Amazon have no resistance to fire.

So many people need to be as wealthy as stupid Donald Trump. That is the problem. One can look at it another way. Half the worlds population may die off and give the world a bit of a reprieve. That would be very helpful.

Unfortunately those who suffer and die are mainly the weak and vulnerable, the very people who do the least to create their suffering. We in the developed world see to that.

If we were to be visited with the impacts of our actions, instead of these distant, poor countries, we would have decarbonized long ago. Oh well, we'll get ours before long.