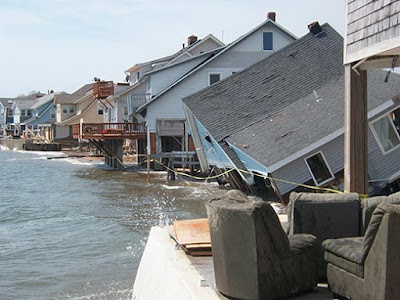 
For eight states, including Connecticut, Rhode Island, Mississippi and South Carolina, the percentage increase in homes built in the flood zone exceeded the rate of increase in the rest of the state.

There are many reasons construction persists despite the danger. In some cases it’s urban sprawl, in others it’s a desire among government officials for property-tax revenues. But whatever the reason, this kind of building activity will “come back and bite,” said Benjamin Strauss, president and chief scientist of Climate Central, which produces and publishes research on the effects of global warming.

The researchers’ objective was to examine “the riskiest of the risky places” — those that “actually would predictably flood multiple times in the course of one mortgage,” Mr. Strauss said. “Even in a time of growing climate change awareness, lots of towns are building fastest in the riskiest places.”

...Building in the very areas that will predictably flood creates two problems, according to Larry Larson, senior policy adviser with the Association of State Floodplain Managers. The first is financial: As flooding eventually exceeds what the houses were built to withstand, homeowners will face rising insurance costs.

“Their flood-insurance premiums are going to skyrocket,” Mr. Larson said. “It’s not going to be pretty.”

The second problem is safety, both for residents and emergency workers. “If that water rises, they’re going to have to send rescuers in there to get them out,” Mr. Larson said.


In Connecticut, where the number of homes built in high-risk areas increased at more than three times the rate elsewhere in the state, out-of-state buyers are buying older homes then tearing them down and building new structures in their place, according to Diane Ifkovic, the state’s coordinator for the National Flood Insurance Program.

When the state has instead tried to acquire some of those flood-prone homes itself, with the purpose of reverting the land to open space, local officials have resisted, she added, fearful of losing the property tax revenue. “We tried this after Sandy,” Ms. Ifkovic said. “There is a lack of political will.”

Insane, though sadly predictable. I wonder if the feds could just declare these flood zones to be abandoned, and no aid will be provided in any way. No sandbags. No cleanup. No fixing infrastructure. No attempts to restore power. And no buying up these properties. Declare their value to be less than nothing.

They are very smart people.


In my coastal town, Stu, the municipality has already cracked down on a low-lying area of really nice houses built in the 60s and 70s. You can no longer obtain building permits, not even for a garden shed. If your house is destroyed it cannot be replaced. That makes these properties unsellable. What possible value do they have? Who would buy them? How would potential buyers get mortgage financing?

The town engineer told me that the muni would be liable for any new construction because it knows that sea level rise, coupled with spring melt and storm surge, can already cause severe flooding.

In the States, different levels of government have different and conflicting interests and concerns. The state and federal governments churn out money for disaster relief but the municipalities want the property tax revenue from reconstruction.

I'm sure it will work itself out. Just not in an non-catastrophic way.

“Homeowners will face rising insurance premiums” Flood insurance premiums are going to skyrocket” I find those statements very interesting, given my recent experience For some years now, my home insurance premiums have been rising steadily at around ten percent per year. Question them and the answer is the same; claims are up significantly so premiums must rise for them to stay solvent. (BTW, these increases started right after Calgary was flooded a few years ago) Secondly, where I live in SW Ontario, in an area NOT prone to flooding, “overland water damage” insurance is simply NOT available from ANY insurer. Also, very high deductibles for ANY water damage, such as burst pipe or other similar cause, are now standard procedure.
So I do find it interesting that properties in flood prone areas are still insurable. They are fortunate indeed some insurance companies will assume the risk and will insure their properties, never mind the cost of premiums.
Will fire protection ultimately follow the same course in susceptible forest fire areas? Mac


Mac, Munich Re, one of the biggest re-insurers, recently warned that home insurance will soon become unaffordable for some.

They're in the insurance business. It's how they earn revenue. Gouge on premiums you'll sell fewer policies and revenues will drop off precipitously. Theirs is an actuarial game. They have to keep prices where they can maximize revenue. Those premiums, however, must be sufficient to cover losses and leave enough for a profit.

They can't cut the customer's throat without cutting their own. However there's an alternative. In the States when storm/flood insurance premiums became prohibitive, Congress stepped in. Insurance coverage was to be had from FEMA. These free-enterprise Republicans set it up so that their voting base could have insurance at well below cost. Did someone say "government subsidies"?

As the FEMA programme ran dry an effort was made to put it on a break-even footing but that sparked a furor. Fair market premiums on damage-prone properties would skyrocket. One realtor with a family home on one of the Carolinas' barrier islands was looking at a premium bump of $1500 per month. That immediately punched a hole in the resale value of the property and narrowed the market to those who could pay all cash. Those who might require mortgage financing were all but excluded.

Thank you for sharing informative blog. You provide home at affordable price. If you want to buy A Home ca then visit our site Bison custom homes