The G20 Isn't a DayCare for Donald Trump's Kids


Couldn't he have just dropped her off at the mall?

Donald Trump's daughter/bride, Ivanka, caused something of a stir when she appeared as a stand-in for her dad at the G20.

Unfortunately for Ivanka, the cameras caught an awkward moment when she tried to join in on a conversation with Legarde, Macron, May and Trudeau. For some reason it seems they didn't observe Trumpland protocol and just let Ivanka share her wisdom.

The Brits have a phrase for it, "taking the piss." And that's how social media has responded to the blonde interloper. Here she is with Dr. Martin Luther King Jr. 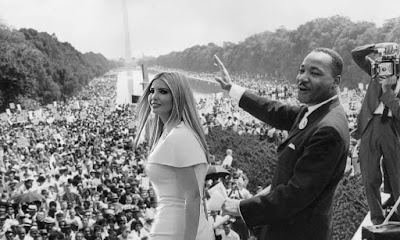 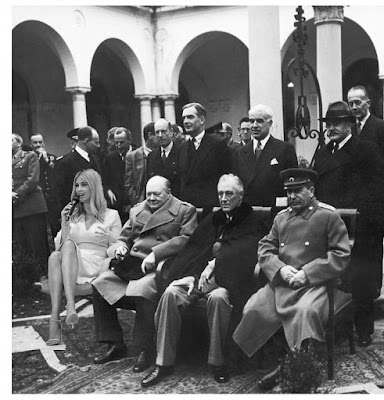 Cementing Glasnost between Reagan and Gorbie. 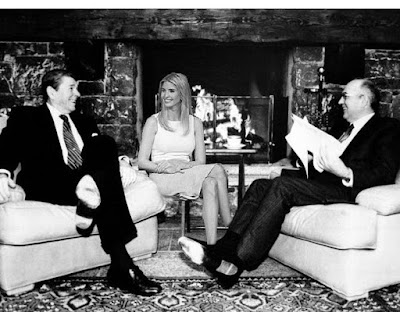 Doing her bit to help the old dudes ratify the Declaration of Independence. 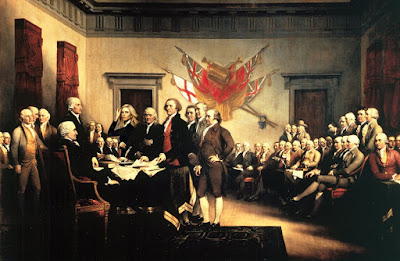 .. not a fan of being 'uncharitable' .. but as far as Ivanka or her bro Bannon.... Barran .. Barack its a tough call who can best 'deliver the fluff' .. or just be fluffy - aside from Supreme self fluffer Donulto Rebotto bin Trumpho d'orange.. Kushner impresses - tho seems not a trophy huntin or pussy grabbin vermin like El Supremo or his alleged spawn.. (surely the FBI could do a DNA run of all these belligerent pus sacks.. deterine who mommy & daddy might be)

Anyway anyway.. princess Ivanka gets my vote for immaculate vacuous middle age mommy.. and she batting 900 at turning daddy's attention to her figure.. ol 'any port in a storm.. or sunny day Donald.. jacked on Viagra & diet something r other (Trump does have that Darvon overload mind meander) (what was I rambling about sez Donald.. and does it even matter.. ? Sean HankyPanky Hannity can brief me & the world later.. 11 PM or 3 AM)

Politically.. we are so far adrift at sea.. to a great great extent.. the entire world.. no keel, no ballast, no rudder or even a damn compass.. officers & crew drunk or asleep or both.. tho presumably Kushner was huddling with his wonderful friend from Saudi Arabia.. damn, but unlimited oil money talks .. while Ivanka gazes vacantly at her fellow or,female 'world leaders.. 'Diplomacy' they now call it.. blended with golf & country club social gossip & mincing prettily. Surely Ivanka can grab futures in Trump Brand Whale Meat For Japan.. make a mean buck by signing some endorsements or aquire Chinese distribution rights overseas.. I hear they dropped 'For Science' and are loading all explosive harpoons, setting forth in Full Whale Killing Mode while Fukushima does a slow roast n toast of the marine shoreline.. (did I mention how impressed I am by Andrew Scheer's shocked outrage ? Just kidding.. he gives not a shit re the last whales)

I think the sad part is that she likely believes she is important and doing good deeds!

When such persons are taken seriously we are in deep shit; sort of like Justin Trudeau.

The similarities should not be missed.

Well the Queen placed Trump's family several windows down from the meeting of the Queen and Trump but alas...Ivanka is being primed as the First Woman President of the US and I am not off the mark. Anyong