What If Only the Rich Got Air? 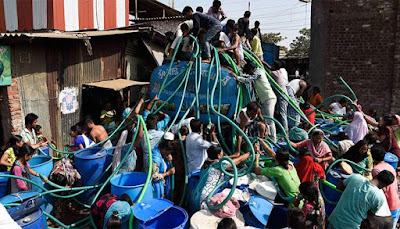 What if there was no end of air for the rich but the poor had to scramble about to scrounge a few cubic metres here and there, never sure where they might find the next source?

That sounds preposterous but substitute water for air and that's the situation today in the Indian capital, Delhi, home to nearly 20 million, most of them poor and vulnerable.


The politicians, civil servants and corporate lobbyists who live in substantial houses and apartments in central Delhi pay very little to get limitless supplies of piped water – whether for their bathrooms, kitchens or to wash the car, dog, or spray a manicured lawn. They can do all that for as little as $10-$15 a month.

But step into one of the slum areas in the inner city, or a giant disorganized housing estate on the outskirts and there is a daily struggle to get and pay for very limited supplies of water, which is delivered by tanker rather than pipe. And the price is soaring as supplies are fast depleting.

India’s water crisis is far from even-handed – the elite in Delhi and most other parts of the country remain unaffected while the poor scramble for supplies every day. Prime Minister Narendra Modi’s official residence and those of his cabinet are in central Delhi, as are those of most lawmakers.

That may help to explain why it took until this week for Modi to call for a massive water conservation program, the first big initiative by the government despite years of warnings about dry reservoirs and depleted water tables, policy makers and water industry experts said.


Delhi’s main government district and the army cantonment areas get about 375 liters of water per person per day but residents of Sangam Vihar on average receive only 40 liters for each resident per day. The water comes from boreholes and tankers under the jurisdiction of the Delhi water board, run by the city government.

But residents say some of the boreholes have been taken over by private operators associated with criminal gangs and local politicians. These gangs also have a major role in providing private tankers, which are all illegal, making people liable to price gouging.

And all this when temperatures, and demand, are soaring. Delhi was the second driest it has been in 26 years in June, and recorded its highest ever temperature for the month at 48 degrees Celsius on June 10.

Monsoon rains reached the capital on Thursday, more than a week later than usual, with only a light drizzle.

In Delhi, nearly half of the supply from the Delhi water board either gets stolen with the connivance of lowly officials or simply seeps out via leaky pipes, several studies show.

well Mound...according to the rich it only would be getting rid of the riff-raff....that's all.


There are some, a small minority I hope, who believe that Social Darwinism is fitting even to life and death issues. My belief? I believe that the guillotine has been greatly under-appreciated.

At least they've got very few guzzling water closets to feed. And there's no shortage of cellphones.

Apologies for the crassness. The references were inspired by something I heard said a few years ago by one of their own public officials.

India's rivers and watersheds have been a source of conflict for long time.

India's Supreme Court is used to decide which states get to take more or less water. This has been going on since Independence, (likely much longer and not via courts battles in the past).

The water situation in India is likely a harbinger of our future.

To take this thread a bit sideways . . .

"Are India and Pakistan on the Verge of a Water War?"

As climate collapse continues the rich and powerful will do what they need to control water. There will be battles.

As a Canadian, I don't trust our thirsty southern neighbor.

NPoV - judicial wrangling over water access isn't confined to India. Florida, Georgia and Alabama constantly litigate their respective access to a shared freshwater resource, the everglades. They're always suing each other and the Army Corps of Engineers that all of them accuse of favouring the other.


When the Chinese occupied Tibet, not many realized what was happening. By seizing Tibet, Beijing took control of the Himalayan headwaters that supply freshwater to China, India and Pakistan.

Will China share that water equitably? Probably not. That is the reason China has constructed a modern highway into Tibet - to rapidly move military forces.

This perpetrated against a culture all in the name of "Clean Water"...for most Canadians to know about this, they would have to had lived in an Asian country for a time. That is how I learned about this. I wonder what is happening in Canada really happening?...actually I know. Look to Nestle's and the "Chin" who is a Director of Blackstone...aww yes! Canada has enough water to supply all the world and much of it polluted Right? Anyong