Did the Long Reach of Donald Trump Cost a Canadian Cartoonist His Job?


The cartoonist is from New Brunswick, Michael de Adder. His former employer - Brunswick News Inc. where Adder's political cartoons ran in four papers. Until he posted this to his social media account. 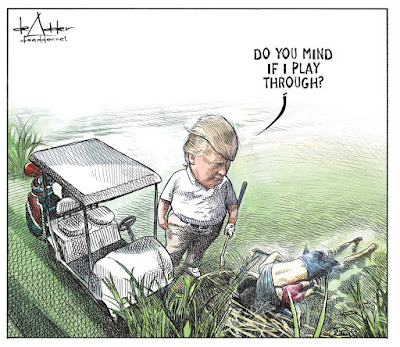 The cartoon shows Trump, golf club in hand, looking at the drowned bodies of a father and daughter recently found in the Rio Grande.  The paper said de Adder's firing had nothing to do with the cartoon. The association that represents de Adder and his colleagues says that's nonsense.


Wes Tyrell, President of the Association of Canadian Cartoonists, claimed de Adder was fired after 17 years with Brunswick News Inc. because Donald Trump was a "taboo subject" for the company.

"Although he has stated there was no reason given for his firing, the timing was no coincidence," Tyrell said in a lengthy statement on Facebook. "Michael de Adder has drawn many well-documented cartoons on Trump, they have however, systematically never been seen in the NB papers."

Previous Trump cartoons by de Adder probably went unnoticed by the company, Tyrell said, but this one went viral thanks to social media celebrities such as George Takei and ultimately led to his contract being terminated.

Tyrell says that, although Brunswick News Inc. is a Canadian company, its business ties within the United States influenced their decision.

"Trade has been an issue since Trump took office," Tyrell said. "And the President himself is an unknown quantity who punishes those who appear to oppose him."

Hardly a surprise if one had paid attention to Graeme Decarie's put down of the Moncton Times and Transcript for years, part of Brunswick News Inc I do believe. The Irving group of companies run New Brunswick as a feudal state and have for decades - it's so crazy, no nominally sane Canadian can believe that in their midst lies such antedeluvianism. Just like you feel I'm being hyperbolic and overblown now, but I'm seriously not. Nova Scotians tend to drive straight through when road-tripping. Forty years ago my company ran afoul of some very strange purchasing practices when we forgot, as in never having heard of such nonsense before, contributions were necessary to the ruling party when selling goods to the province. Joy!

Irving really wants to bring back Energy East so that the $200 million dilbit export terminal currently lying unused and for which Irving refuses to pay civic taxes, can be brought into use. Lac Megantic and Bakken shale oil have the odd Irving connection as well. A glyphosate-drenched forest softwood monoculture province brought to you by Irving Forest Products, and which caused the firing of the province's Chief Medical Officer who objected to the practice in a study -- although officially other stories were told of her demise. Decarie documented it all in spades. An ex-Irving engineer name of Higgins is the nominal premier, and criticizes public health and education as being inefficient, because that's the official line. The Atlantic Institute for Market Studies, rumoured to be Irving-funded, issues rah-rah conservative articles for local pom-pom waving Chambers of Commerce vacuum heads. New Brunswick makes Alberta look like the land of the free. It is owned. Dystopia Now.

Irving Oil expanded into Maine some decades ago, so that's your US connection. Had to sell all the gasoline its Saint John light oil refinery (300,000 bpd) produces. Not enough Canucks in Eastern Canada and Eastern Quebec to sop it all up. Dilbit refining capability? None, so far as is known. So Energy East pipeline was never about supplying the real East with alternative native feedstock free of the Saudis, but for dilbit export to the US only. You never read that from the dumb cluck regular press. It's all just oil to them and the idea of Canadian oil for the whole Canadian market sounded great until you looked beyond your nose. Beyond their pay Grade to investigate.

Irving Halifax Shipyards have also produced some crackerjack Coastguard patrol vessels which can't go out in a mild breeze without rolling like barrels and making the crew sick. Google it. Of course, officially, they're all-weather wonder boats.

DeAdder lasted longer than the previous NB Chief Medical Officer. So there's that. The benevolent world of the billionaires proceeds apace.


Jesus, BM. That's an eye opener. The province sounds like some start-up mining town. I have frequently read Graeme's critiques but you've added a context we, at the far end of this country, don't comprehend.

.. BM nails it.. I know it.. plus the same or similar thingy re the McCains.. some families just don't know when to stop.. so much money it becomes stupid time.. kind of a 'royalty' phenom comes to pass..

Just look at the 'behaviour' or demeanor of The Trump family.. I was never a fan of John McCain politically or in regard to religion .. but I recognize he was a 'man' .. the real deal.. sucked it up big time.. They don't (so far) name US Navy men o war ships after bone spur suckholes such as Donald or his punkass progeny or wives or funflucks.. Though USA Stormy ? Now that works for me.. apropos.. Mebbe 'name' a couple of leaky pumping tenders - The Trump series tenders that can latch on, pump & suck out sewage from subs, aircraft carriers, guided missile frigates.. nothing of course of any sort of 'valour' .. just pumping action & huge storage for waste

I had to look twice, thought it was a photograph.

11:40 is correct...Yes Mound...it is an eye opener for you. People in the Maritimes have put up with this for years and years while people in Alberta complain about equalization payments. What a holy joke those families are.

And I comprehend it too.