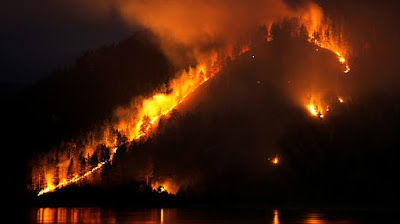 The Land of Vlad has declared a state of emergency over wildfires sweeping Siberia.

The fires, which began earlier this month, and the Russian government's lacklustre response have raised concerns over Moscow's commitment to addressing climate change. The country relies heavily on the oil and gas industry and has a poor record of enforcing green initiatives.

Like other parts of the high north, temperatures soar in Siberia.


Environmental groups worry that in addition to the destruction of carbon-absorbing forest, the carbon dioxide, smoke and soot released will accelerate temperature increases that are already melting permafrost in northern Russia. An estimated 12 million hectares of Russian forest has burned this year.

Temperatures in Siberia last month were as much as 8 degrees Celsius (14°F) above long-term averages and hit all-time records in some areas, according to data from Russia's state meteorological agency.