We Need to Talk - About Loyalty 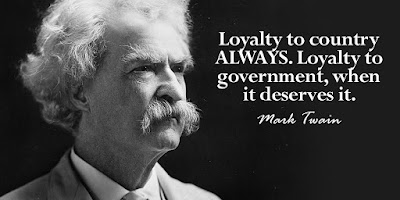 With an election just three months away, can we say that our political parties are really loyal to the country and our people?

Loyalty is an elusive term, shifting according to circumstance. As a general rule, the more dire the situation the more focused the word becomes. Being loyal in good times can mean not pissing people off. In difficult and dangerous times loyalty takes on a greater significance.

We are in difficult and dangerous times. The future is unclear. Warnings from ten years ago that appeared dire enough at the time have proven to be optimistic, overtaken by events the pace and extent of which were not foreseen.

This is a time when priorities must be recalibrated. What was most important 30, 20, even 10 years ago may no longer be our main priority. Since the neoliberal order was ushered in during the Reagan, Thatcher and Mulroney era, the priority has been the economy and economic growth above all else. To suggest otherwise was heresy. Governance became the stuff of technocrats, grey suits stuffed with wet cardboard. No longer were leaders of the stature of Laurier, St. Laurent, Diefenbaker, Pearson, Douglas, Lewis and Broadbent, Stanfield,  or Pierre Trudeau needed. Canada slid into the rut of neoliberal technocracy and we're still in that rut today.

Any doubt about the rut and its primacy is dispelled by a government that introduces and passes a motion declaring a national climate emergency and then goes back to business as usual in the petro-state that Canada has become.  Here we are, on the cusp of 2020, a decade that has the potential to bring chaos to the global order, the shrine of neoliberalism itself, and our government, having paid lip service to the climate crisis immediately returns to the quest for perpetual exponential growth and the spread of climate-wrecking bitumen anywhere it can be sold.

The global carbon economy is already claiming lives, inflicting upheaval and displacement and it is not unfair to say we don't care. We don't. Flooding the world with high-carbon, low-value bitumen will only add to Canada's butcher's bill and we don't care.  We'll dodge the worst of it for a decade, maybe two, but eventually the youngest among us today will pay the price of our avarice and indifference. We don't care.

Those who have developed a taste for this prime minister's prevarications, what I might call "horseshit," are ready to believe the prime ministerial whopper that bitumen is the key to a green future for Canada. That requires a high order of dewey-eyed gullibility but there are some willing dupes quite happy to extend it to Mr. Trudeau's nonsense. Cognitive dissonance is sometimes too easily shared.

How do we define 'loyalty' in a time of crisis? The first recital in the preamble of the federal Emergencies Act speaks to this:

WHEREAS the safety and security of the individual, the protection of the values of the body politic and the preservation of the sovereignty, security and territorial integrity of the state are fundamental obligations of government.

Can a government that ignores its statutorily prescribed "fundamental obligations" be considered loyal to its people? Why? How? It strikes me as an egregious act of disloyalty to knowingly put our young people in peril, to consign them to a degraded future far worse than the decades or ease and comfort we have enjoyed. It is at once both parasitic and predatory.

Surely that is the hallmark of disloyalty.

I know, I know. The Liberals are better than the Conservatives. They constantly remind us that 'they're not them' as though that's good enough. It's not. I accept that the Conservatives would be worse. Having read the platform or manifesto of Bernier's outfit, his gang would be the worst of all. But what if all that's on offer, all there is to choose among them, comes down to shades or degrees of disloyalty?

I no longer believe any party can be loyal to Canada, to keep faith with the Canadian people, and still adhere to neoliberal principles in a time of national emergency. If neoliberalism ever was a strength, and it is hard to believe it was (the price was never fully understood), it is a worrisome vulnerability when crisis descends. It's the very stuff of disaster capitalism. Why should we tolerate such disloyalty from our political leadership?

These are, of course, just my musings but I think the points raised here will acquire greater clarity as the coming decade progresses.