The New Chant of the Fuhrer Rallye 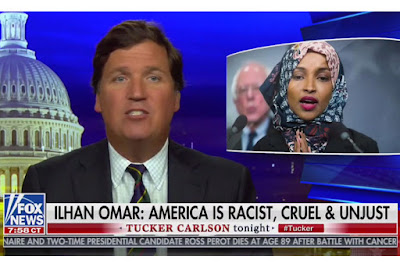 Last time around the deplorables chanted, "Lock her up. Lock her up." Their target, the citizen they wanted put away, was, of course, Hillary Clinton. That was then. This is now.

At today's Fuhrer Rallye there's a different but even more odious chant stirring the mob. Now it's "Send her back. Send her back," a reference to representative Ilham Omar.


Trump has whipped his mob into an Islamophobic frenzy after deliberately and falsely accusing Omar of supporting al Qaeda. 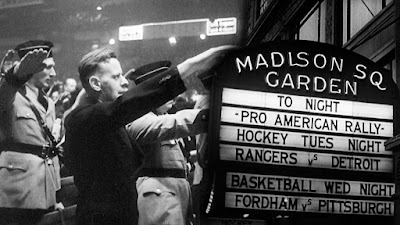 I'm working my way through a fascinating book, "Defying Hitler," based on the memoirs of Sebastien Haffner. Born into a solid, middle class family in Berlin in 1907, he became a lawyer and a junior court referee. In his diary Haffner gives a vivid account of how his society, his friends and colleagues, incrementally succumbed to Nazism. It's a telling account for those who say "it couldn't happen here." It sweeps aside the illusions we have about the security of our own democracy.

Haffner, his secular Jewish wife and their son, were able to escape to Britain in 1938. He worked for The Observer, returning to Germany in 1954 where he wrote for Die Welt and Stern. After his death in 1999, Haffner's son arranged his unpublished diaries into the book, "Defying Hitler." It's a powerfully insightful and equally disturbing book. Well worth the read.

If you're interested in the book, here's a review of Defying Hitler from the New York Times.
Posted by The Mound of Sound at 5:35 PM

.. I have grave, troubled concerns up here in Canada eh.. Here in the flatlands - Great Lakes region, we have Doug Ford declaring his 'unswerving' belief or trust in Donald Trump. Elected Ontario MP Kellie Leitch (conservative) proclaimed her 'exitement' upon his election. Andrew Scheer seems lost currently in his plan to revisit the new Canada Food Guide (and the daily review of propaganda from the Hamish factory must be time consuming plus his daily on camera newsies.

Who else Canadian) is carrying a torch for Donald Trump & the new racist GOP ? I mean lets get it out.. no holdback, full disclosure. We need a highly refined concise question to all Canadian political parties, their candidates, elected MP's or MPL's or spokeswanks, PR companies, ad agencies..

WHERE DO YOU STAND.. ? 10 words or less re every single question ? Since WE (Canadian taxpayers) pay and pension our elected PUBLIC SERVANTS.. and therefore countenance their respective political parties, their polls, their propaganda.. Please Respond post haste

I just watched clips from the rally. Trump is not only stupid and incompetent. He's evil.


In a world dominated (good and bad) by men, tRump sets up women as the targets for the worst abuse.

I believe Owen is right. There's evil in this man. It resides in his instincts, perhaps the legacy of Roy Cohn.

Sal, I think the categories or issues you set out would present an accurate picture of the state of politics in Canada today. They all touch on issues in which we're divided.


Yes, NPoV, Trump much prefers to target women. That reminds me of the last debates were Trump would creep up behind Hillary Clinton on stage.

When I see Trump rallies where they start to chant "Lock her up" or "Send her back", it strikes me that the rally is the beginning of a lynch mob. I'll bet that if Clinton or Omar were at the rally (I don't know why they would be, but assume it for the moment), and Trump stoked the crowd, Clinton/Omar would be in grave danger.

Funny how the racist eruption has eclipsed the Epstein scandal for the moment.

I noticed that the 'squad' was using the added scitiny to promote their agendas rather than just push back. Good for them.

Perhaps they are learning their lessons?
"The so-called “opposition” to the tyrant in the White House has been playing a game of appeasement and focusing on outside “threats” like Russia, instead of tackling the real enemy: the American ruling class establishment."