Bookends Separated Only By an Ocean? 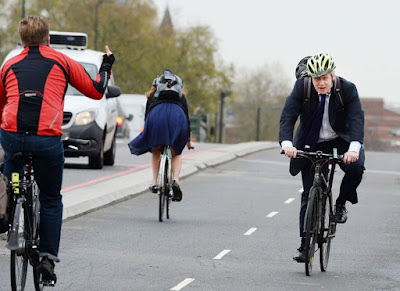 "He is infamously cavalier about detail, bored by complexity,
known to react peevishly and sometimes with a ferocious temper when frustrated or contradicted, and has a notoriously casual relationship with the truth? All that and more."


Does that ring any bells? No, it's not Trump. Trump's alter-ego, perhaps. It's Boris Johnson, who is expected to become the next prime minister of the UK on Tuesday.

The Observer's chief political columnist, Andrew Rawnsley, writes that Boris, to borrow a Brit phrase, might not be "fit for purpose" when he enters Number 10.


He will have to learn how to be prime minister. The schoolboy who wanted to be “world king” has spent many years lusting after the job, but that is entirely different to doing it. Many previous tenants of Number 10 will testify that no other role is an adequate preparation for the demands of the premiership. Tony Blair, a highly accomplished leader of the opposition before he moved into Downing Street, once told me that he didn’t really get the hang of it until he had been doing it for four years and he had the shock absorber of a landslide majority while he was learning on the job. Gordon Brown arrived with a decade as chancellor under his belt, but floundered desperately as prime minister. Boris Johnson has never been in charge of a public service department and was an embarrassment in the one cabinet position that he has held.

...After the briefing on the nuclear deterrent that every incoming prime minister receives, one of the first tasks of the cabinet secretary and other senior mandarins will be to update him on the latest thinking about the EU’s negotiating position and the consequences of a no-deal Brexit. Who will want to puncture his fantasies about what the EU will agree to and warn prime minister Johnson about the hazards of a calamity Brexit when they are likely to be received with a contemptuous lecture to “get off the hamster wheel of doom”? Another deep anxiety in Whitehall is that they will be smeared as scapegoats if it all goes horribly wrong. Since he won’t want to accept the blame for shattering the economy, his instinct will be to accuse others.

...His peer group in the European Union will endeavour to put a diplomatic mask on their incredulity that he has been chosen as prime minister. They want an orderly resolution to Brexit, but there is no reservoir of trust for a man who rose to journalistic fame by confecting fabrications that toxified British attitudes towards the EU and who then fronted the mendacities of the Leave campaign. The chances of striking a bargain have been made slighter by the way in which he has campaigned for the leadership. He might have used his dominant position in the contest to introduce some realism into Tory minds about what can be achieved and give himself some scope for manoeuvre. He has instead upped the ante on himself by declaring that Britain will be out on 31 October, “come what may”, “do or die”, deal or no deal. In the closing stages of the campaign, he made reaching an agreement even harder by saying that he wants the Irish backstop ripped out of the agreement altogether.

The case made for him by his cheerleaders is that he is a master of the theatre of politics, a skill that was absent from his predecessor’s rigid repertoire. He will have a chance to display that characteristic once the prime ministerial limousine has conveyed him from Buckingham Palace to Number 10 to make the customary doorstep speech. We should expect typically florid phrase-making about seizing the opportunities of Brexit, looking to the sunny uplands, making Britain great again and similar braggadocio. The grandiosity of his rhetoric will be swiftly mocked by the crimped circumstances in which he is going to find himself. He will not be in the happy position of Margaret Thatcher in 1979 or Tony Blair in 1997 or even David Cameron in 2015. He will not be a freshly elected prime minister with a mandate from the country that he can call his own. He will have been put there by the tiny minority of people who are members of the Tory party. Whenever he claims to speak for the nation, the nation will be entitled to rebuke him for that presumption.

...The most intense pressures on him will be self-made. En route to Number 10, he has made large promises that are going to be tested to destruction when campaign poses collide with the reality of a precarious premiership. He has told his party that he will get them a much better deal than Mrs May and, if the EU doesn’t succumb to his demands, Britain will leave without an agreement on Halloween. He has also promised his party that there will not be an election before Brexit is done. He has further declared that he will not countenance another referendum. At least one of those pledges cannot be kept. When it has to be broken, I’d quite like to see the look on Theresa May’s face.

As for Trump, by all appearances he's already forgotten how Boris, while mayor of London, described the Mango Mussolini:


“I think Donald Trump is clearly out of his mind,” Johnson, who was at the time the mayor of London, said of then-candidate Trump’s 2015 call to ban Muslims from entering the United States. In response to the Republican hopeful’s early criticisms of London, which Trump erroneously described as having “no-go areas” teeming with Islamic extremism, Johnson said Trump betrayed “a quite stupefying ignorance that makes him, frankly, unfit to hold the office of president of the United States.”

On the prospect of a Trump visit to London, Johnson said he would welcome the president, “except that I wouldn’t want to expose Londoners to any unnecessary risk of meeting Donald Trump.” In some ways, Johnson’s thoughts about Trump when he served as London mayor were similar to those of his successor to that position, Sadiq Khan.

Boris let May absorb the heat of EU-leaving negotiations by not contesting the Tory leadership after the Scheer-like austerity twit Cameron resigned following Brexit. Didn't have the patience to negotiate Brexit. Telling those continental yobos straight out what the deal was going to be, that was more to his style of being the Great Empire Bwana lecturing the unwashed foreigner. And if they didn't like it they could lump it.

Not for Boris to actually "lead" his country. Much too wrapped up in being Boris and posing as Boris. He's been the Billy Bunter of real life, always getting into scrapes by getting things wrong, but above all preserving his public Borisness, that persona of being an affable twit, an amiable rogue who's somehow got it all sussed out. Yeah, the Trump routine from a different angle.

Thus yet another sociopath shambles onto the world stage convinced he's genius personified, because everything he's interested in he carries around on his own two legs 24/7, and if he can gerrymander a situation to his perceived personal advantage, he'll do it. A most dangerous fool. He'll start the war with Iran if it suits him - the Brits seem unable to equate/square the act of reciprocal tanker seizings, because they're right and Iran's wrong. That is the logic the idiots have used so far and it's transparently dumb. That's the hand of Boris right there. Incomprehension of reality and a Boy's Own Comics mentality that it's a super wheeze to tweak the ears of dark-skinned foreigners.