Don't Take This the Wrong Way 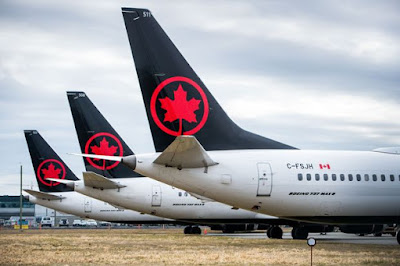 I'm not trying to guilt you out. Even by today's standards I've been as much a sinner as most.

A study finds that air travel is a major contributor to atmospheric greenhouse gas emissions. A single long-haul return holiday trip produces more carbon emissions per passenger than the entire annual GHG output of citizens of dozens of countries.

For example, I have a daughter who now lives in Amsterdam. She's insistent that I fly out to be with her and her beau.  The calculator shows that Vancouver YVR to Amsterdam Schiphol return equals 1,284 kg. of CO2, more CO2 than the average citizen produces annually in 66 countries.

This comes at a point where air travel is expected to set another record this year.

Air travel is expected to increase three-fold over the next three decades. If designers succeed in developing more fuel-efficient aircraft, total emissions will still double by 2050.


“The increase in traffic has historically outpaced the improvements in technology,” says Dr John Broderick, who researches climate policy and international transport at the University of Manchester.

When I did a lot of air travel it was mainly in the 60s and 70s. Air travel was far different back then. For starters, there was less of it. People didn't venture quite so far away from home for work or play. Relocating to live in Europe was more of a luxury back then than it has become today. There was no "cattle class" as we have today. And there were a lot fewer people to travel - our population has more than doubled since the 70s.

What to do, what to do? I certainly don't know. Flying has become so deeply integrated into today's way of life in the developed countries that it's hard to even imagine what our lifestyle would be like without it. Yet we know that if there is to be a viable climate for future generations 'doing without' is the key.

The prescription calls for global emissions to be cut in half by 2030 and few of the big emitters are even in that ballpark. Then, if we somehow do manage that first target, we'll have just 20 years in which to cut the remaining half. That means decarbonizing our economies, decarbonizing our societies.

There's already discussion about rationing air travel. You might have to choose between laying on a beach in Hawaii or showing your respects at Aunt Tilley's funeral. Tough choice, eh?

In the meantime, I'll join James Lovelock and refuse to wear a hair shirt while the rest of the world parties to death.


Yes, NPoV, but Lovelock turns 100 next week (the 26th) and said that when he wrote off humanity as unsalvageable.

Lovelock also got thrown off course by "the pause" in which warming seemed interrupted. He took that as evidence that his outlook was wrong. We now know that was a period in which massive amounts of heat were pumped into the ocean depths due to a sharp change in air currents.

His "party hearty" comment came when he concluded we might as well barrel on and end it all. He had a bout of nihilism. It wasn't his proudest moment. That was also when he turned against wind power arguing that it spoiled the view from his home.

We used to have railways just about everywhere. The idiots in charge removed the tracks. For much of western Canada we have no interurban bus service since Greyhound pulled out. We either have to drive ourselves or fly.

Back when I was employed there was a lot of talk about teleconferencing. Did that ever take off? Not as much as it should.

My ancestors crossed the ocean to live in Canada. They never went back. They wrote letters. These days with family everywhere there is constant pressure to visit.

People used to cross the oceans by ship. Now tourists fly around the world to board a floating hotel that chugs around in circles for a couple of weeks after which they fly home.

To sum up, we tore up reasonably efficient infrastructure for the sake of speed.


The notion of "common good" has become a quaint artifact, Toby.

I think that Air travel and cruise ships are two of the industries that should've been the first to be phased out, like back during the Rio summit in '92 just say, these will be shutdown over the next 2 years. Though one can argue that about any number of luxuries we in the west take for granted. It's almost sacrilege to say 'no, even though you have the money for that, you can't do it, or buy it, because it's too destructive to the biosphere'.

Also, as I understand it, we have no real 'carbon budget', not even the 12 years to reduce emissions by 50%, as even the best case scenarios require the use of massive scale negative emissions technology to remove billions of tons of CO2 out of the air every year and store it somewhere. Even if we stopped all emissions now, we still have a big 0.5c+ temperature jump from the 40ish year lag time for the effects to be felt, and possibly another 0.5C-1c from the loss of short-lived aerosol particles from industry. Even the best case scenario is scary.

I live in southwest ON, and it's so strange how mostly normal everything is, while watching disaster unfold elsewhere. I'm sure we'll get ours though.

Hi, Stu. We rarely hear about the global carbon budget. It has been quite accurately calculated through two independent models. We know how much additional CO2 we can add to the atmosphere before we trigger 2C but we don't like to talk about it.

Our reluctance is rooted in the equitable argument. This holds that the remaining emissions in the budget should be allocated to nations based on population. Every person in every nation gets the same allocation and no more. That's a pretty solid argument since most of the existing atmospheric loading has come from the more lightly populated, developed world. However, for the rich nations to accept that equitable rationale would mean virtually shutting down their carbon economies overnight and, of course, they wouldn't hear of it.

We know what the remaining emissions budget is but we contend, without saying so, that it should be ours, not lesser nations'.

Are you still eating meat? It’s a bigger threat than transportation.

That being said, improvements are needed on both fronts.


Since you asked, UU, I rarely eat meat. Nothing particularly altruistic about it, I just lost the taste for it. Fish, that's another story. There's a government fishing port about half a mile down the road and a small processing plant that operates a retail shop. Nothing particularly exotic - salmon, cod, halibut, sometimes tuna, oysters, mussels, clams, prawns and dungeness crab - but it's local, it's fresh, it's not endangered (yet) and you can develop a pretty good liking for it.

Just mentioning that eating meat - including seafood - contributes to global warming and global depletion as much as most modes of generally accepted transit.

Indeed, some sort of rationing thing would see to be the only equitable/fair thing to do. But as Elvis, or maybe Thucydides said:
"right, as the world goes, is only in question between equals in power, while the strong do what they can and the weak suffer what they must."

However, I don't think even the more "radical"* leftists Greens or NDP are arguing for rationing or a steady-state economy, shutting down major industries, or rapid transition to a plant-based diet, as the IPCC report says, and, arguably rational thinking would demand. It's like those are simply inconceivable, our society values profit above all else.


*I'm unsure of any studies into whether or not profit is edible, potable, or breathable in case of planetary emergency.*

*believing in infinite growth is somehow not radical

(I'm no expert, and bearing in mind the Dunning–Kruger effect)

Yes that was Thucydides. You're right that we have no real inclination to equitable approaches to a problem we, the rich, bequeathed to the poor.

There's a term making the rounds, "climate apartheid," that envisions the affluent west fortifying their collective border and just letting the others die off.

Climate Apartheid appears to be the almost de-facto policy in the U.S., and appears to have substantial popular support. In Europe the same thing is happening. As well as Australia. The Ottawa Sun had an editorial advocating machine-gunning Tamil refugees some years ago, I believe. Authoritarians.

How does one actually HELP to shelter/feed tens of millions of more people, when most countries are broke from bailing out the ultra-rich and bankers, and dealing with water shortages/heatwaves etc?

A grim, if interesting question is if it's possible to actually STOP tens of millions climate refugees from crossing a border, or sea/ocean? I'd assume defense planners have at least thought about it.


Stu, Gwynne Dyer touched on this dark quandry in his book "Climate Wars."

The scenario is a massive wave of climate migrants through an exodus from no longer habitable Central America. There are some signs that, in countries such as Guatemala and Honduras, this is already happening.

Research out of the University of Hawaii, now supported by other studies, concludes that the world will enter "climate departure" beginning in the early 2020s. It's like flipping a light switch. Every year after it arrives will be hotter than the hottest recorded year before. Every year. Constant extreme heat. The results would be devastation of agriculture, inability to work outdoors, heat stress and deaths. CD is expected to reach even temperate zones such as Canada's by 2047.

Dyer got his information from contacts at the Pentagon. The situation they foresee is America itself reeling from climate change - extreme heating in the south, sea level rise along the coasts - resulting in an "internally displaced persons" (IDP) emergency. The US, struggling to meet the burden of relocating American citizens ever northward would not be inclined to accept border crossers, refugees, even if it had the means to accommodate them.

America wouldn't be happy with images of their sons and daughters in uniform mowing down these migrants and so other ideas are being tossed around such as robotic gun turrets to do the killing, media blackouts etc. Who knows?

Europe faces a similar predicament. What do you do with the Spanish, Italians and Greeks if their homelands become excessively hot just as masses of refugees flee the Middle East and northern Africa?

There is already discussion about the EU fracturing along a north-south divide with the northern countries essentially abandoning the southern states.

Dyer also touched on the need for macro-environmental engineering (hail mary) solutions, such as massively dosing SO2 into the upper atmosphere somehow, once the runaway multiplier effects are in play. I personally fear some in the screwball GOP will expect a nuclear winter to be a perfect suitable antidote. --Scott in Montreal