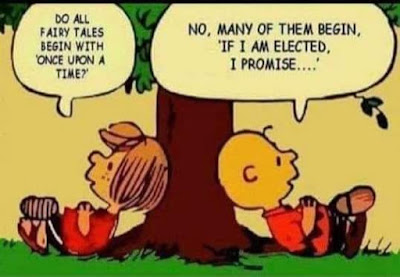 Are you ready for the upcoming election campaign? You're going to hear more bullshit this year than you did last time and last time they really laid it on thick.

They'll be shucking and jiving, Trudeau and Scheer. They'll have a special supply of bullshit on hand when they start parrying questions about climate change. Trudeau will preen his feathers and crow about his carbon tax. Scheer will reply with utter nonsense  knowing that his base, the knuckle-draggers, don't really give a shit about climate change, not if you tell them a horde of immigrants are coming to steal their jobs.

The problem isn't them, it's us. We let them look us in the eyes and lie their asses off. We don't punish them for their lies. If we did, Justin Trudeau would no longer be the leader of the Liberal Party.

Trudeau and Scheer aren't running for something. They're running against something - each other. "Vote for me. At least I'm better than that asshole."  Wow, some choice. Yet, between them, they'll still account for better than 70 per cent of the vote. A lot of that will be auto-pilot votes, a tribal sort of thing. The family tradition vote. Dumb as a rubber mallet but, by god, consistent. The rest will be those they'll have to hoodwink with empty promises, the type Jacques Parizeau labelled 'lobsters' to be hauled from the trap and dropped in the boiling water before they can change their minds.

You see, there's the problem. We have to fear what they tell us, their pitch, knowing that a good bit of it will probably be bullshit. In a functioning democracy it should be they who fear us.
Posted by The Mound of Sound at 5:04 PM

I can't wait to hear all the bullshit because for the first time in my long history of paying attention will vote Green as I have said recently, with a conscience. I will listen and despair over the continuing gullibility and stupidity of the low voting turnout fools. Vote with your conscience and vote Green for a change.

I have to echo zoombats here. Voting with my conscience, I see no choice other than the Greens.

Count me in....I will be voting Green if I can and if I can't, will spoil my vote. Anyong