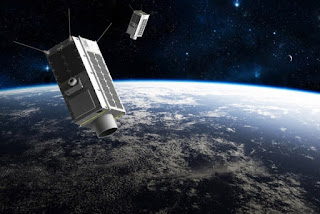 When it comes to methane, the technology needed to identify the source of fugitive emissions from space isn't far off. And not just by some general area. It's possible to identify methane released by wellhead. Better yet, it's a way to climate-shame a political caste that has preferred to look the other way.  From Scientific American.


Satellites ...survey large swaths of the planet. Their use of a single sensor also provides more consistency, making measurements from different spots directly comparable. Until recently, though, satellites have been prohibitively expensive and their spectroscopic sensors have lacked the precision of those closer to the ground, says Laure Brooker Lizon-Tati, an engineer with Airbus Defence and Space in Toulouse, France.

That dynamic started to change within the past decade, as broader industry demands drove the miniaturization of electronics and shrank the costs of rocket launches. This made it possible to develop smaller, cheaper satellites that carry sensors capable of zooming in on individual sites to capture high-resolution methane measurements. Companies and one environmental group have leaped at harnessing such satellite capabilities for industries and policymakers eager to pinpoint individual local methane sources. But governments and large aerospace companies, encumbered by lengthy planning processes, have been slower to pivot away from a focus on measuring methane emissions on a regional and global scale. In 2016 the Montreal-based company GHGSat was the first to get off the ground with a proof-of-concept satellite called Claire, which successfully detected methane emissions from specific sites.

A handful of other groups have followed suit. The nonprofit Environmental Defense Fund has enlisted several companies to develop what it calls MethaneSAT, which could provide weekly coverage of up to 80 percent of the world’s major oil and gas production sites once it launches in 2021.

...If these companies can help inaugurate a new era of satellite monitoring of emissions, their efforts could lead to meaningful changes on the ground in several ways. Enabling companies to swiftly spot and fix more methane leaks from wellpads and pipelines would already make a difference in addressing emissions, Lauvaux says. Yet there are also the intangible benefits, as more satellite data can help generate a clear visual picture of the “massive amounts of methane floating around” that would resonate more with ordinary people than numbers alone, Lauvaux says. And when enough members of the public get concerned, he adds, more officials may finally feel compelled to do something about it.

“Climate change is such a difficult concept to see for yourself: you cannot touch it, you cannot look at it,” Lauvaux says. “But when you start to see the methane pouring out of a tank, I think the satellite images are going to really talk for themselves.”

.. Canadians need to sadly realize we are fed deception daily.. not nutritious at all
Of course.. the headwaiter, servers and buspersons are Main Media..
But the chefs in the kitchen are our elected 'public servants' & they hired the extra staff.

I do not believe in any way.. the Canadian voting populace realizes how much 'self regulatory' nonsense & falsehood is perpetrated by 'Associations' representing or fronting or 'charitable' for uh, say.. 'Big Energy' .. (and when I say 'we know' .. 'we' is the tiniest slice of the overall voting population) But OK .. they lie. Bottom line.

We know know Alberta's self regulatory associations have been barfing up misleading reports & outright deceit on greenhouse gas emissions, not to mention other toxic and poisonous pollution. Why would they bother determining or making public the actual extent of seepage, leakage, spillage, pillage, stripping and ripping, extirpation of species, habitat ? Or how the mechanics of avoiding existing legislation, remediation agreements, promises & debt.. fiduciary responsibility.. are simply evaded ?? Or ignored ?? Hell, they have legal firms and 750.00 per hour lawyers to look after those felonies.. or just repeal the laws and existing legislation if they have a majority government

That a tiny motivated 'environmental' entity could book affordable time on an orbiting satellite and measure/record methane emissions (among others) is priceless..The worm is turning.. churning.. hungry for fact, truth.. Political Parties & sadly - Governments.. are the polar opposite. They have zero interest in THE PEOPLE WHO PAY THEM.. knowing the extent of the sellout,. the corruption, the ignorance or malfeasance that is actually going on.. That's not 'mistake' .. or poor decisions.. that's CRIMINAL .. & on vast scale


What few of us understand is that the conduct you describe, Sal, is standard for petro-states. A petro-economy is greased with lies. Without them it collapses. Nikiforuk has written a book drawing parallels between Canada and other petro-states - the Saudis and the Gulf States, Venezuela, Mexico, Nigeria, etc. For those of us brought up to see Canada as a true liberal democracy, the truth is a little jarring.