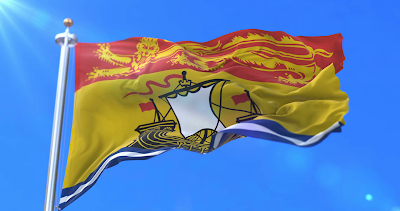 Anyone who regularly reads Graeme Decarie's excellent blog, The Decarie Report, is regaled at how that province operates as the feifdom of a few powerful families that control commerce, industry and the province's media.

Yesterday there was the matter of political cartoonist, Michael de Adder, who was abruptly dropped from all four New Brunswick papers after posting to social media a cartoon that was scathing of Donald Trump.  The president of the cartoonists' association saw straight through it.


Wes Tyrell, President of the Association of Canadian Cartoonists, claimed de Adder was fired after 17 years with Brunswick News Inc. because Donald Trump was a "taboo subject" for the company.

"Although he has stated there was no reason given for his firing, the timing was no coincidence," Tyrell said in a lengthy statement on Facebook. "Michael de Adder has drawn many well-documented cartoons on Trump, they have however, systematically never been seen in the NB papers."

Then there's the notorious Irving family.  Ottawa loves feeding them shipyard contracts. They've got a lock on an awful lot of New Brunswick industry and commerce. In June, 2016, the National Observer asked "What have the Irvings done to New Brunswick?"  A year earlier, Atlantic Business, featured a corruption crusader who, it said, had returned, "to the Maritimes only to discover how much Tajikistan looks uncomfortably like home."

Macleans found that New Brunswick is "testament to the well-worn adage that the story of Atlantic Canada is of leaving for other places."

Okay, it's a corrupt, dead-end province. Now this. Senior Liberal MP, Dominic Leblanc, is being fingered for his family, friends, even his neighbour being awarded five of six recent federal judicial appointments.

Erin Crandall, a professor at Acadia University who has written extensively on the politics of judicial appointments in Canada, said patronage is still a significant force in provinces like New Brunswick, despite reforms to curb its use in the selection of judges.

...Several academic studies have shown New Brunswick has traditionally owned one of Canada's most patronage-tinged judiciaries and little has changed in recent years, despite Liberal promises to inject more merit into the selection system.

A 2010 study that looked at 856 judicial appointments in Canada over a 15-year period found "major" political connections were involved in New Brunswick appointments nearly 77 per cent of the time — double the national average and more than five times the rate politically connected people won federal judgeships in provinces such as British Columbia and Ontario.

New Brunswick may not be Louisiana North but the ghost of Huey Long would probably find it pretty comfortable.

New Brunswick is the poorest province in the Country...how do I know....lived there at a time when CBC wasn't allowed in the province. One doesn't have to look far as to what can happen in Canada for long a time past and a continuous march forward....Anyong


It is something, Anyong. Right up there with Quebec in the Duplessis era.

I left my comment on New Brunawick yesterday. It was just like Quebec until 1960 when an actual competent person, Louis Robichaud, became premier. Didn't snuff out the established party backhanding though. But Irving was on the rise and replaced the old establishment from 1970 when a potato chip magnate took power.

You have only brushed the surface of the back of beyond society the province is; people cannot believe you're making up anything but a fairy story when you tell them some of the nastiness.

Plus the previous Republican right wing attack dog Governor of Maine thought the Irvings were great, and the forests beckoned for monoculture just like next door. Maine citizens turfed his sorry ass in 2018 and there is a new Democratic governor there as of this past January, and she has passed many emergency bills to counter the ruin that LePage brought. No pressure from Maine on the Irvings then. So who knows why Irving dumped DeAdderthe other day - they have never run any of his Trump cartoons in any case. Probably one Irving or another having a fit of rage.


BM, your comment from yesterday was jarring. How in hell did this happen?

Sorry, Anon, I can't grasp what you're trying to say.